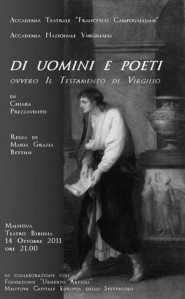 So the time has come to rewrite – or at least significantly rework – Di Uomini e Poeti, that is, Of Men and Poets. It had a good run back in 2012, and it was published, but I’ve always wanted to do something more and better with it.

Now a reprise is in the air, for Mantova’s year as cultural capital of Italy: what better chance for a new version of the play?

So I printed a copy and began searching for the notes I’d made back then… A lot of them, I thought, because I remember sitting in the audience or backstage, night after night, listening for what worked and what didn’t, jotting down page after page of careful notes for the day I got to rewrite. There had been not workshop, so it was all immensely surprising and useful. Plot things, and ideas, and bits of characterisation, and small tweaks, and whole lines blossomed… I can almost see myself in a seat in the back, scribbling madly by what little light oozed from the lighting board. Once a lady asked if I was from one of the local papers, and looked doubtful when I shook my head “no.” She must have wondered what other reason I might have had for so much frantic activity… Do you think she took me for some modern version of the scribblers that unscrupulous Elizabethan printers sent to the playhouse to copy plays for unauthorised publishing? 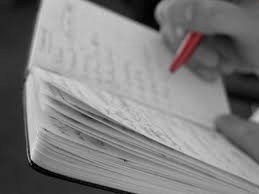 Oh well, never mind that – but it stands to reason that there should be lots and lots of notes, right?

And I’m not the tidiest person, so it took some time and work to unearth a four-year-old Moleskine. But in the end I found it, and leafed through it for my notes, and found them, and…

…And there’s little more than half a page of them. Less than a page – some of it useful enough, some hazy – but that’s it. Or is it? Did my storytelling mind make up all the note-taking because it was nice and writerly – the Playwright At Work? Or did I use another notebook at the time, and don’t remember? Clearly enough my memory is unreliable, but in what way? Am I forgetful or self-deluding?

From a practical point of view, I rather hope it’s just a matter of mistaken notebooks, because I could do with all those pages of detailed notes. On the other hand, I’d be fascinated to know I have the sort of mind that makes up pretty little montages of myself being playwrightly… A little alarmed, too – but fascinated.