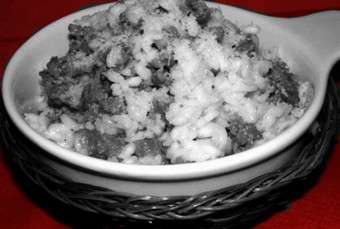 First, you have to know that a risotto is a first course of  rice cooked with a variety of ingredients. In my corner of Northern Italy, it’s pork sausage and grated parmesan, basically – and it’s not just a staple food. In the words of my friend Milla, who moved here nearly twenty years ago, “it’s far more than a dish. It possesses quasi miraculous powers. It sates hunger, cures all ills, seals friendships and celebrates any and every occasion.”

In other words, it’s a persecution

Now don’t mistake me: it’s quite delicious.  My troubles are with the way it’s made the focus of all social and cultural life… At times it seems that, here around, nothing can be done without risotto – and that the safest way to keep local folks quiet and reasonably attentive for an hour or two, is to promise plenty of risotto afterwards.

Oh, all right – I’m slightly exaggerating, but not all that much. The fact is, I’m being bitter and sarcastic, because…

Do you remember the Squirrels and the project about Shakespeare and the power of words? Well, Gemma the Drama Teacher has found herself a sponsor. A neighbouring town wants the Squirrels to perform it at their summer fair in August. 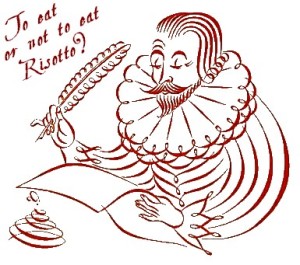 Oh yes – except Gemma got this email from a town councillor, and the gist of it is: how great to have you! Our own Shakespearean event! Wonderful! Why, we even named this year’s fair after it, you know? It’s to be: From Risotto to Shakespeare!

From Risotto to Shakespeare.

I’ve read the email. It’s full of enthusiasm. They are in good faith. And named the thing From Risotto to Shakespeare. Truly.

“Are you sitting on the floor and weeping?” Gemma asked on the phone, after forwarding it. “I am. I’m weeping grain  by grain, all the way to Shakespeare.”

And so was I, because really… From Risotto to Shakespeare? Are they eager to show off and, at the same time, fearful that the locals will flee at the name of the Bard? Do they think someone might mistake the fair for an academic conference unless the presence of risotto is clearly advertised? Do the expect the prodigious risotto  to draw the untheatred crowds to Shakespeare? Oh, to have been a fly on the wall of the meeting room, when the Town Council, enthusiastically produced From Risotto to Shakespeare…! I’m pretty sure they still congratulate themselves on a brilliant notion.

Ah well. I guess it could have been worse. At least it’s not From Shakespeare to Risotto…

3 thoughts on “Shakespeare and the Power of Risotto”