This post is my entry for the “No, You’re Crying” Blogathon, an event hosted by Moon in Gemini – about our favourite tearjerker films…

What is it that makes us cry, at the movies or elsewhere? Whenever the question crops up, I’m reminded of Uncle Vernon in An Awfully Big Adventure, explaining how the lowest notes of the male voice automatically trigger his lachrymal sacs…

So, is there a measure of automatic reflex to something – like, say, the Dolby system? That’s what I used to believe, as a young girl, about my awkward tendency to tear up at the movies… A tendency I luckily outgrew, given my positive horror of crying in public. I mean, I did find quite moving many movies I watched at home – and yet I hardly ever cried. But sit me down in a cinema, and off the waterworks went, at the least provocation… It had to be something, right? Something that was not my appalling lack of self-control? 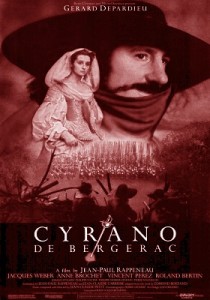 But, as I said, I outgrew the easy tears – or so I thought until my French teacher brought a bunch of students to see Jean-Paul Rappeneau’s new version of Rostand’s Cyrano de Bergerac – in the original French. And among those students was I, a teenage theatre geek, with little liking for Gérard Depardieu, and a lachrymal apparatus made of Kevlar.

But I knew and loved Rostand’s play. I owned a copy, bought in Paris, much read, and annotated to death:I took drama classes, back then, and together with my friend Federico we had big projects for our own translation and production – in which, of course, he’d be Cyrano, and I Roxane… Yes, well. I was sixteen, and he fifteen, you see. Anyway, off I went to see Cyrano, a little bit distrustful, and armed with a foreknowledge of the very, very moving events of Act 5… Now, this being the Blogathon it is, I don’t suppose we have to worry overly about spoilers, have we? Besides, I daresay the plot is widely known by now… Still, do stop here if you don’t want to know, right?*

Still here? Good – then you either already know or don’t mind to be told that Cyrano dies in the end: he dies in the arms of the woman he loves and has lied to all his life – first because he thought himself too plain for her, and then because, when he found out that she (unknowingly) loved him back, he felt bound to keep a promise to a dead friend. The dead, handsome and rather dull friend he’d foisted on poor Roxane as a husband by lying to her in the first place…

Oh, really: when you think about it, the whole of Cyrano sounds like a cruel joke, doesn’t it? A joke hatched to circumvent a girl’s love of fine words and offer some gratification by proxy to her cousin. It goes greatly to Rostand’s credit that you hardly notice while the play progresses – and yet the bitterish melancholy of it all is there all the time, just under the frothy world of the Précieuses bluestockings, Cyrano’s thrasonical exploits, the battles, the wordplay, and the courting. And Rappeneau captures the play’s spirit very, very well. His Paris is colourful and lively, but with a measure of grit, and everything grows steadily gloomier as the story dances on… And then there is Gérard Depardieu. As a rule, I don’t care for him – but his Cyrano! Dreaming and desperate, arrogant and gentle, and boastful, and bitter, and so very, very sad. Oh dear. 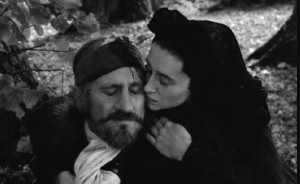 I remember sitting happily in the audience, and savouring the rich, nuanced, melancholy whole, to Jean-Claude Petit’s perfect music… and then Act V came, and the wounded Cyrano staggered to the Convent for his weekly visit to the widowed Roxane, and the old fiction crumbled in the face of death… and I began to cry. And it was not the Dolby, you know. It was the  lost chances, the irreparable mistakes, the silence broken too late, and most of all the heroically squandered life – all falling like withered leaves in the twilit garden…

Rhymer, brawler, and musician,
Famed for his lunar expedition,
And the unnumbered duels he fought, —
And lover also, — by interposition! —
Here lies Hercule Savinien
De Cyrano de Bergerac,
Who was everything, yet was naught.

“You’re crying!” gleefully whispered my often-teased best friend from the next seat. “No, you’re sobbing!”

In truth, I don’t think it was just the movie – I have since bawled over Act 5 in several theatres, and even at home – but so my lachrymal apparatus was not made of Kevlar, after all. It only takes the right combination of bittersweet hopelessness, words, light and music to set it waterworking.

So, what does make you tear up? And I recommend that you visit Moon in Gemini to find all the other lovely entries of the Blogathon.

* If I sound a little nervous about this, well: I was once reprimanded very sternly on Good Reads, for “spoiling” the ending of a very well-known 19th Century Italian novel… Let us say that I have grown wary.

6 thoughts on “The “No, You’re Crying” Blogathon: Sniffling for Cyrano”