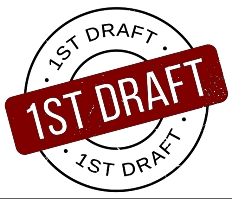 Well, no – this is not to say that I have finished Draft 1… I’m about halfway through, though, and it is not an entirely bad place to be at this point.  Oh, I do have almost daily bouts of How Will I Ever Meet The Deadline, but it is a common disease, and actually I’m pretty much on schedule, so what does one do, except ignore the bouts and write on?

That said, how am I doing with my drafting experiment? A while ago I posted about trying to work from a Draft 0. It was a not-quite-first-but-first-enough for me, and yes, perhaps a huge project with a publisher’s deadline is not the right field for experiments of this sort…? It hadn’t seemed like an exceptionally bad idea at the moment – but I see now that, if it had turned out to be, at this point I’d be really in the suds.

Well, I’m happy to report that it hasn’t, and I’m not.

As I said, I’m halfway through Draft 1, and so far Draft 0 has been a really useful tool: detailed enough that I know where I’m going, flexible enough that I can make changes when they occur to me, without getting lost. When in doubt, when a Now What? moment comes, I have something to fall back on, a map of the land that is a good deal more detailed than a succession of notecards.

All is well with Draft 0, then?

Well, I don’t quite know yet.

For one thing, the last part of Draft 0 is less tightly structured. Nearing the end I’ve left things looser, to allow more leeway for the resolution. I know who did what and why, of course, and I have a pretty good idea of a number of individual scenes.  You could say that I know how things will turn out – but the farther I go, the more I will have to work on the structure too. I haven’t reached that part yet, so… we’ll see how it goes.

For another I expected, when moving from Draft 0 to Draft 1, to hit the ground running, so to say. I had, after all, some 10000 words done – a synopsis, yes, but with some colour and depth to it… It was a bit of a disappointment that it still took me a while before I found the right voice and rhythm – and a satisfying daily wordcount. I didn’t stop to analyse why this happened, but the matter will require some thought in the future.

So, this is how things are going so far. On the whole, well enough – but it’s still early to tell.