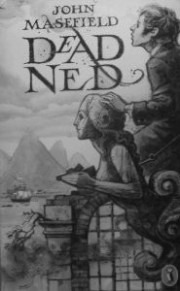 I came across John Masefield in what I suspect is the usual way: through his Salt-Water Ballads.

It was by sheer serendipity that I happened to read Sea-Fever just as I was researching my Ink and Salt Water play… The contrast between the yearning in the poem and the unsuccessful sea career in the biographical notes earned Masefield a place in the play, together with Conrad and Salgari.

That he also was Poet Laureate of England, and a remarkably prolific author in a variety of genres had no immediate bearing on my choice, but was interesting enough, and since then I have read more of his works. I don’t remember quite how I found out about Dead Ned and its sequel Live and Kicking Ned, but I bought both books as promising summer reads. In the end, for several reasons, it took me ages to read the two small Puffin paperbacks – some five hundred odd pages between them, “slightly abridged”… Let us say it was a prolonged pleasure.

The story, set in XVIIIth Century, is that of the eponymous Ned, a young doctor falsely accused of murdering his benefactor, and sentenced to the gallows, rescued by his friends, and shipped off, literally, on a slaver bound for Africa and then America. Except, bad trading choices by the villainous first mate and then acting captain leave Ned stranded on the coast of Africa, where he is rescued and taken in by a mysterious white tribe. But the Kranois have trouble of their own, and our hero soon finds himself entangled in war, conspiracy and revolution…

There is everything and the kitchen sink in this story: coming of age, murder, trials, an eleventh… well, a thirteenth hour rescue, pirates, slave trade, Africa, seafaring, mysterious civilizations, social commentary, adventure, war, more adventure… It never becomes cramped or rushed, though, because Masefield knows how to tell and pace his tale. With its vivid and often lovely descriptions, its twists and turns, its varied settings, the story feels huge, and Ned himself is a likable, engaging first person narrator, a little naive, but smart, resourceful and good-hearted, occasionally reaching through the fourth wall to nudge the reader into sympathy.

I still think Ned’s story is a perfect summer read – the sunny, adventurous kind, with that make-believe feel that calls for long afternoons and a swing in the garden – with good writing and storytelling to booth.