Well, a couple of months ago a town councillor approached us about a shared event with the local sewing-club: an evening of reading and sewing. I must say I wasn’t wild about the notion. Call me a narrow-minded snob, but I wasn’t sure we’d have much in common with the seamstresses… All the same, the councillor is a persistent woman, and there was a chance that I might be wrong, and in the end we said, why not.  We already had scheduled and “Arts and Crafts” themed night, and it sounded fitting, so…

So, Tuesday night, we gathered at the Library – earlier than usual, because apparently the seamstresses were afraid we might keep them up late – and found our new friends already there, and a little miffed because we hadn’t arrived even earlier – and also because they’d had to put aside their machine-sewing for the night, in favour of quieter cross-stitching.

Not the most promising of starts, isn’t it? But that was nothing. Once in the library, the seamstresses swarmed to take all the seats around the table we usually use, spread out their stitching tools, and started to merrily cross-stitch away – without as much as a greeting to our poor little selves.

There were seven of us, pushed in a corner, with most seamstresses giving their back to us. That’s when the councillor sketchily explained the evening’s purpose, the nice shared experience awaiting us, and all that jazz. That she felt the need to ask the seamstresses to keep quiet during the readings, I found a tad ominous. By then, I was in full Told-You-So mode, but it was too late to walk away – so, since there was no sign of quieting down, we decided we’d just start.

And start we did, with extracts from a book of memoirs about old river jobs. We are river people, around here, and there is a long tradition of water-related jobs. It’s a shared past, and we thought it might be of common interest… How naive of us. All through the reading, our seamstresses kept chatting in what perhaps they deemed – but weren’t – low voices. Clearly, we had failed to grab their attention. I was next in line, with the opening pages of Kipling’s The Bridge Builders, and Anglo-indian civil engineering proved as useless as the local washerwomen. Then it was Pablo d’Ors’ rival printers, then it was Maxence Férmine’s luthier… nothing. The seamstresses were as uninterested and uncaring as ever.

“Shall we make a little break now?” asked at this point our rather annoyed leader. No, was the answer, because they always eat at the end of the evening. Oh well, then: we were more than happy to read on, and I had just started with my translation of the Lighting Designer’s Tale (from Judith Cook‘s Backstage), when the leading seamstress up and announced we were going to eat the cake now. 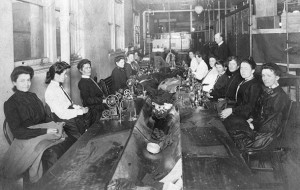 The seamstresses sat back – with something approaching ill grace. By the time I reached my last word, they were already handing out cake on paper plates…

After that we, the disgruntled readers, closed ranks, and went on reading – not much caring if the ladies with the needle listened or not. Needless to say, they did not, and instead grew noisier and noisier. We had some more Férmine, some Hrabal – until, quite in mid-reading, the seamstresses started packing up their stitching, and filed out, barely sparing us a “good night” – not to mention a “thank you”. But when I say they filed out, I’m overstating the case. As a matter of fact, a few of the ladies stopped well within hearing, to make some more, and louder, conversation. You see, poor dears they had kept so utterly silent all evening, they just had to give voice to a thought or two…

And yes – I’m waxing sour. But the fact is, when I went and asked could they please lower their voices, because we were still trying to read, they just moved over a few steps, and resumed their chatter… Ad Alta Voce – Aloud, indeed.

On top of it all, as we finished, the councillor arrived, all smiles, to say that yes, perhaps the two groups hadn’t mixed well – yet. A matter of different needs and interests, did we know… But perhaps next time… Not a word of apology – nothing. They tell me she is the head-seamstress’ daughter.

Then again, it was our own fault. We did invite them in, after all – like the ghost in that story. But now we’ve learned our lesson. Reading and sewing don’t mix well. We can’t expect much in the way of interest – or manners, either. Town councillors are potentially dangerous, and we must never again assume they know what they are talking about.

It was an experiment, yes. Let’s call it a learning experience. Now we can all happily go our separate ways, and next time we go back to reading, thank you very much – with and for people who come for the books and the stories.