I’ve said it before, and I’ll say it again: I’m no Marlovian, thank you very much. I think Kit Marlowe was a genius without adding Shakespeare’s canon in the bargain and, if you wanted to pigeon-hole me, you could say I’m an orthodox Stratfordian who occasionally enjoys the story potential of alternative theories – provided it’s done well.

This is to explain that I don’t share the opinions contained in the Marlowe Studies Website. Still, they have lovely things there – one being a series of black and white images of Thomas Walsingham’s Scadbury Manor. Or at least, what remains of it.

For instance, look at this: 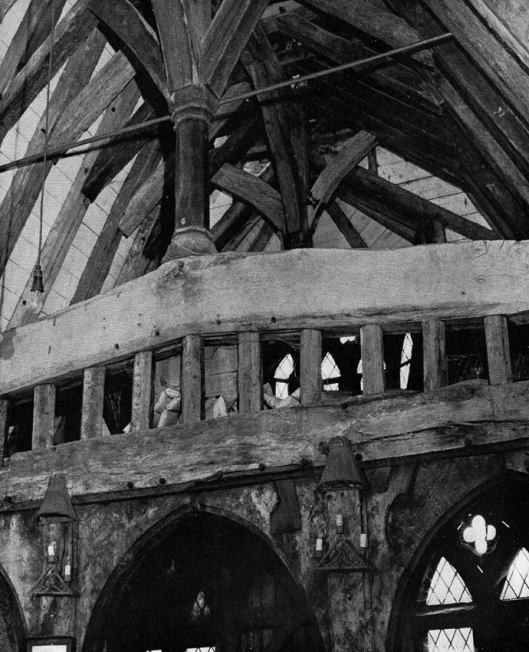 This is the timber ceiling and musicians’ gallery from the Great Hall at Scadbury. According to Marlovian scholar Antonia D. Wraight,

These timbers were removed at the time of the demolition of Scadbury Manor at the beginning of the 18th century, incorporated into a large farmhouse built about this time at Foot’s Cray some two or three miles away, and brought back to their original site for re-erection by Major Hugh Marsham-Townshend in 1921. This reconstruction is now fast falling into disrepair and ruin again.

Which is a pity, because Thomas Walsingham (later Sir Thomas), a much younger cousin of the homonymous Sir Francis, was Kit Marlowe’s patron and friend. He inherited Scadbury in 1589, and certainly invited Marlowe to stay there. Indeed, it was in Scadbury that, in May 1593, an emissary from the Privy Council reached the poet he had orders to arrest.

Marlowe was never to see Scadbury again – and it is tempting to think that it was in the Great Hall, just under these timbers, that poor Kit stared his fate in the face, in the form of Henry Maunder. Well – minus the electric bulb, of course.

And if you want to see more images of Scadbury, you can find them here. Just go to the page and follow the links – and maybe hope, as I do, that the funds and the will can be found to preserve what remains of the place.