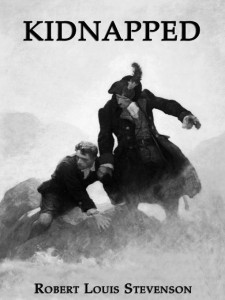 One day many years ago, in Edinburgh,  I took shelter from yet another icy downpour in a little bookshop – and what could I do, but browse the shelves? For some reason, a small blue book caught my attention: Kidnapped, by R.L. Stevenson. I’d read Treasure Island, of course, and Jekill&Hyde – who doesn’t? – and The Black Arrow had been a childhood favourite. Now another historical novel from the same author, and with a Scottish setting to boot, seemed like a good idea, even though it was printed on flimsy grey paper, in a font so small to imperil one’s eyesight… Still, buy it I did, and after the bookshop, ensconced myself in a nearby tea room, ordered tea and scones, and began to read.

Back then my English was shaky at best, I found Stevenson’s Scottish accents more than a little bewildering, and I didn’t even like pious, conscientious and frankly dull David Balfour all that much… Still, because Stevenson is Stevenson, and reading struck me as a far more pleasant way of learning than studying grammar, I read on. I read until the rain stopped, and I read on the bus home, and I read that night in bed – and then, on page 48, Alan Breck Stewart took centre stage.  And I was lost. 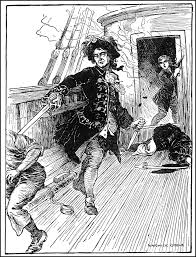 Because, truly, the kidnapped boy may be the quasi-eponymous hero, but Alan, flamboyant, volatile, with “a dancing madness in his eyes that was both engaging and alarming”, steals the scene from him completely – and indeed, were it not for this unreasonable, touchy and resourceful Jacobite, David would never survive page 100.

I was fascinated to learn afterwards that Alan was a historical character – though a very different one from Stevenson’s charming lad. It seems that, after reading the papers of the Appin Murder Trial, Stevenson became convinced of the historical Alan’s innocence, and this prompted him to write the tale in the form of an adventure.

The historical Alan, reconstructed at the University of Dundee… Quite unprepossessing, isn’t he.

When reading about the historical Alan, one realises that he was quite a nasty piece of work: a violent, arrogant, easily offended fellow, who dressed gaudily and deserted at Prestonpans, and may or may not have killed the Red Fox – but left his certainly innocent foster-father to be tried in hia place and hanged for it. Well, Stevenson did not try to make this tearaway into a nice boy. He kept the unpleasant traits, mixed them with a number of (fictitious) good qualities, and shook well.

His Alan is arrogant and easy to anger, with little qualms on the subject of violence, reckless, vain of his elegance, and equipped with a moral code that is nothing short of tortuous… And he is generous, loyal and kind-hearted, and more than a little naïve – and he has a droll sense of humour, a good education, and a tendency to compose ballads at interesting moments. The result is both a quintessential swashbuckler and a well-rounded character.

I had no idea, when I first met Alan, that Henry James considered him “the most perfect character in English literature”, but he certainly has become and remained one of my favourite characters of all times, both in absolute terms and for the way in which Stevenson created him.