So, the New Oxford Shakespeare credits Christopher Marlowe as co-author of the three Henry VI plays.

Well, actually fourteen more plays get co-authoring credits by someone else, and Arden of Faversham is added to the Canon, as well as one added scene in Kyd’s Spanish Tragedy…  But – probably because he is more widely known, and because of the Authorship rumours ever since Ziegler – the idea of Kit Marlowe having had a hand in the Henrys is doing most of the splash.

Well, unlike Davide, I have a good deal of sympathy for Marlowe – but if the question is, do I feel that my faith is vindicated at last… well, actually I don’t know that there was much of a faith to vindicate. Let me explain first that I’ve never been of the Marlowe Wrote Shakespeare persuasion. As I think I’ve written here before, I’m a pretty orthodox Stratfordian: I believe that Shakespeare wrote Shakespeare – only, I’ve always wondered at the claim that he’d done it all alone. And not because he was a provincial glovemaker’s scantily educated son – but because the world of Elizabethan play-writing didn’t work like this. It was a small, thick, fiery world in which everyone knew everyone, and they worked together on the same play, or else reworked someone else’s* to suit the company’s needs… I’ve never believed that Shakespeare lived and wrote at a remove from it all, all proud and solitary. And I’m not alone in this: the idea that someone else had a hand in the Henrys is far from new, and Edmund Malone proposed it as early as 1790. 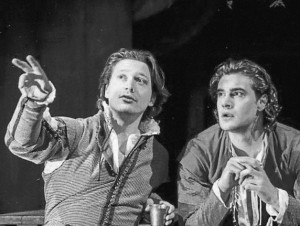 I’ve always thought it easy to imagine, say, the Admiral’s Men taking a good look at the unexperienced Will’s Henry – the one that wasn’t yet Part 2 – shaking their heads a little, and then calling in the man of Tamburlaine and Faustus, who was already a star playmaker. It seems that, if anything, I was understating the case, for now a combination of traditional and statistical analysis is used to make a case for Marlowe having worked on all three Henrys to such an extent that he deserves author’s credits.

Hm. Is this a story that I see before me? And this, Davide – this makes me very happy.

* which is, by the way, what The New Oxford Shakespeare means by co-authorship in the case of Shakespeare and Middleton and All’s Well that Ends Well.