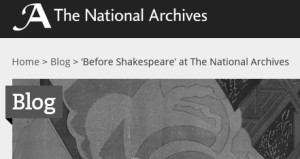 As I was busy completing the la(te)st revision of my novel before pitching it at the HNS Conference in Scotland, I came across this lovely article at the National Archives Blog.

And so I learned that, while I’d always assumed that people walked to the Theatre via Bishopsgate, Bishopsgate Street and Shoreditch, this was not the case. Not that the Burbages wouldn’t have liked such a straightforward route to their playhouse – but there was opposition from the local landowners – particularly from the Earl of Rutland, who effectively blocked the easy access…

Burbage was no doubt annoyed – but not excessively dismayed: he managed to establish an alternative, if somewhat more circuitous, route through Finsbury Fields and Moorfield. that did nothing to hinder the success of the Theatre and the neighbouring Curtain – much to the disgruntlement, one imagines, of Rutland and his neighbours.

As I said, I was tying up my revision, when I discovered this intriguing tale, and wondered: what could I do to incorporate it in my story? Well, the spat with the Earl of Rutland had happened long before my story’s time – so, with some regret, I had to give up the chance to pitch colourful Jem Burbage against an Earl… But what of the consequences? I rather think that, when faced with a map of Tudor London, most readers would make the same assumption as I had about Bishopsgate – but I have this one scene where the Admiral’s Men are trying to squeeze better terms out of Burbage, and one of their arguments is that the Theatre is soooo out of the way for play-goers… All the more so if they had to go there by way of Finsbury… So I began to incorporate that in the dialogue.

And I realised that, without explaining why they couldn’t go by the obvious route, the thing lost much of its bite; but there was no way to explain that wouldn’t make the dialogue clunky. Oh, bother!

So here I was, with not only a tasty morsel of historical fact, and no good (as in “not overly expository”) way to squeeze it into the one scene where it mattered, but also with a certain uneasiness at ignoring it altogether… One of those HF conundrums.

In the end, being rather pressed for time at the moment, I  decided to tweak the relevant argument so that the exact route to the Theatre was not mentioned – and that was that. Now I’m half tempted to go back, and see whether I can find a nice way to use the tidbit after all… mentioning the thing earlier, maybe – and have it emerge again in Chapter 6, just enough to complete the story… and maybe show in passing how very differently the Admiral’s Men and Burbage see it.

Maybe, yes – but only if it works well with the rest, without feeling gratuitous, clunky or pedantic. Because… novel, you know. One can be shy of contradicting known sources – but this doesn’t mean necessarily inviting the known sources for dinner.