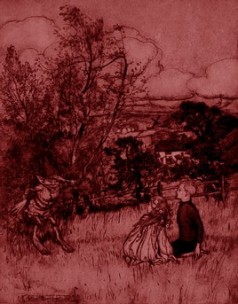 So, my own Lunedì is right behind the corner…

The Lunedìs are this series of weekly staged readings centred around a theme – and last year we had Greek Tragedy. And we also had the members of a Psychoanalysis Club following the readings with some sort of analysis and debate. I know it sounds weird – but it worked really well: eager audiences loved the readings and then debated with gusto, and the house was beyond packed for six consecutive Mondays…

So this year we sought a theme that would allow us to work with the same format – and alighted on fairy tales. It turns out that there is a great deal of psychoanalytic literature about fairy tales – as well as a lot of room for stage work… Then again, being what we are, it wasn’t long before some of us began to stray from the path of strictly traditional fairy tales: after Little Red Riding Hood two weeks ago, we had Oscar Wilde’s Star Child – and next Monday it will be my turn, with Kipling’s Puck of Pook’s Hill. 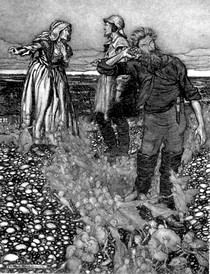 “Why did you choose that particular story?” keeps asking Dr. R – who will be in charge of the analysis/debate side of things. He does it, for all the world, as though he were trying to analyze me – and I keep saying I chose it (or rather them, since I combined two stories from the collection) because it is a story about stories, mostly. About how myth, history and folklore are closely intertwined. About how tales are born, change or keep. About the ties between imagination and land… All things that I love – and when the chance happened to bring them on a stage, could I really pass it up? No, of course not.

What Dr. R. makes of it, I have no idea. Luckily I won’t be the subject of his talk on Monday: what he will say about human psyche, roots and imagination – now that‘s going to be interesting. But this is his side of things.

On my side, I have a lovely story, a truly fine cast of readers (including two very young students from our drama school doing Dan and Una), a few Rackham illustrations – and, one hopes, a good pinch of stage magic.

Oh by oak, ash and thorn – but I can’t wait for Monday.