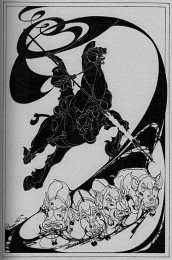 I love Christopher Marlowe’s Tamburlaine the Great – and by that I mean the first of the two parts. It may be rougher around the edges than his later work, but it’s breathlessly fiery. With his blank iambic pentameter, with the historical subject-matter, and his unpunished bloodthirsty hero, the boy (all of twenty-three at the time) was breaking ground in many ways – and knew it well.

Both playwright and play feature in my novel – the one I’m currently peddling around – and here is the rather gorgeous snippet that will be my hero’s first taste of Marlowe’s poetry:

Nature, that framed us of four elements
Warring within our breasts for regiment,
Doth teach us all to have aspiring minds.
Our souls, whose faculties can comprehend
The wondrous architecture of the world
And measure every wandering planet’s course,
Still climbing after knowledge infinite,
And always moving as the restless spheres,
Will us to wear ourselves and never rest…

Heady, isn’t it? The rhythm, the words, the music, the colour of it! And that third line! That ladder of one-syllable words, each one a rung up, up, up – until it all blossoms into that wonderful aspiring mind*… really: music!

After which, I’ll say I’ve always found it something of a pity that it goes on like this:

Until we reach the ripest fruit of all,
That perfect bliss and sole felicity,
The sweet fruition of an earthly crown.

And earthly crown? I mean, after all the stormy, burning paean to human aspiration and thirst for knowledge, an earthly crown comes like a bit of bathos, don’t you think? And I can’t say quite what I’d like to be there instead, mind – nor do I deny that wanting a crown makes perfect theatrical sense for the shepherd-lad from Scythia. Oh well, let us say that I like to stop after “and never rest” and leave it at that.

Still, it is stirring. And you can very much sense Marlowe himself behind Tamburlaine: the fiery lad of twenty-three, master of his language enough to fashion his own sort of line, and to write an entire tragedy within a four-colour scheme; the scholar eager to show off; the inexperienced playwright, still struggling to meld seamlessly his own lofty ideas and his character’s very tangible goals; the ruthless game-changer… And all of it shows through a larger-than-life conqueror who is amoral, cruel, arrogant, vertiginously ambitious – and doesn’t have a shadow of a qualm about it.

Could my actor hero help being swept off his feet? Couldn’t and doesn’t, but frankly, poor lad, he never stood a chance.

* I quote this to my friend M. whenever she takes out the vacuum cleaner… it’s a word-play on the fact that in Italian aspirare (“to aspire”) works for both the hoover and the mind. For some reason best known to her, she is not amused…