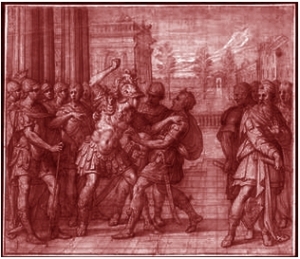 There is this thing in Shakespeare’s Coriolanus – Act 3, Scene 2 – where the eponymous hero is dragged home by his friends after wrecking his campaign for Consulship.

Caius Martius’s unwilling bid for popular vote in the Forum began badly, and ended worse when the two People’s Tribunes goaded him into a shouting match. All patience lost, he gave them all a very abrasive piece of his mind on the rabble and its representatives – the sort that the Tribunes can easily construe as treasonous speech. So now he is at home, with family and friends trying to talk him into what he perceives as a humiliating apology, unless he wants to face charges of treason for himself and/or civil strife in the City.

But Martius, still seething with outraged pride, won’t hear reason – not even from his Mother, the redoubtable Volumnia, who pushed him to run for Consulship in the first place. So Volumnia scolds, pleads, reasons, cajoles, emotionally blackmails – all to no avail…

CORIOLANUS Well, I must do’t:
Away, my disposition, and possess me
Some harlot’s spirit! my throat of war be turn’d,
Which quired with my drum, into a pipe
Small as an eunuch, or the virgin voice
That babies lulls asleep! the smiles of knaves
Tent in my cheeks, and schoolboys’ tears take up
The glasses of my sight! a beggar’s tongue
Make motion through my lips, and my arm’d knees,
Who bow’d but in my stirrup, bend like his
That hath received an alms! I will not do’t,
Lest I surcease to honour mine own truth
And by my body’s action teach my mind
A most inherent baseness. 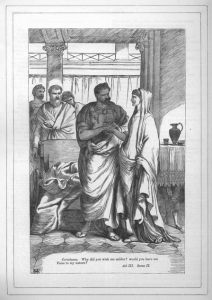 To no avail, that is, until…

VOLUMNIA At thy choice, then:
To beg of thee, it is my more dishonour
Than thou of them. Come all to ruin; let
Thy mother rather feel thy pride than fear
Thy dangerous stoutness, for I mock at death
With as big heart as thou. Do as thou list
Thy valiantness was mine, thou suck’dst it from me,
But owe thy pride thyself.

And that’s exactly what it takes, because…

CORIOLANUS Pray, be content:
Mother, I am going to the market-place;
Chide me no more. I’ll mountebank their loves,
Cog their hearts from them, and come home beloved
Of all the trades in Rome. Look, I am going:
Commend me to my wife. I’ll return consul;
Or never trust to what my tongue can do
I’ the way of flattery further.

So Volumnia pursues her advantage, and…

VOLUMNIA Do your will.
Exit

And of course Martius does as she wants – and things will get worse – much worse – and in the end it could be argued that this inability to say “no” to his mother has a good deal to do with Coriolanus’s undoing.

It’s all highly dramatic, and yet I can never read, watch or hear the confrontation between Volumnia and her son without smiling – because my mother has this same technique down to perfection, ever since I was a child. She’ll argue, plead, scold, reason, cajole, run the whole gamut – and then, quite suddenly, she’ll give up, with the equivalent of Volumnia’s Do as you will, and… exit Mother. And that’s where, invariably, I give in. Do your mothers do it too? And mind, I know and recognise the manoeuvre – I’ve known for quite some time… and yet I still fall for it, exactly as I did when I was ten.

Exactly as Coriolanus does.

And I can’t help wondering: did Mary Shakespeare do it with her children – including a very young William? Did Anne Hathaway use it on Susanna, Judith and poor Hamnet, and maybe on her husband, too?

One thing is sure: whether on young children or stubborn generals, it works. It works only too well.