Remember when, back in January, I told you that I was experimenting with the idea of a Draft 0 for A Treasonous Path, and I’d let you know how it worked for me? Well, it would seem it worked well enough, because I’m doing it again. Six months later, and I’m at work on Draft 0 of Tom’s third book – for now TW3.

It’s been almost a week now, and I’m not going as quick as I could wish, because I’m in the thick of a bout of semi-procrastination – but still. I find that I liked the process the first time, and I’m enjoying it again now. I’ve spent June up to my ears in 16th century papers in English and French and Latin, and emerged from the plunge with a nice background for my story, a mostly real-life cast of characters, and a real-life timeline that provides almost all the intrigue, death, and mystery I could wish for.

Now equipped with my basic pieces, I’m moving them around, fleshing out things, building cause-and-effect chains, making trouble for Tom in general, changing my mind quite often, finding out things that were there – only I hadn’t seen them yet, trying to fit things together… 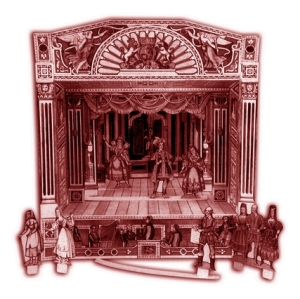 The best part of it? The fact that it is all still so small scale and fluid makes the process a good deal easier and more manageable. Why, now that I come to think of it, it has the general feel of moving characters and changing scenery in a toy-theatre. And here is where I confess that I’ve always wanted to make toy-theatre sets for each thing I write… and yes – it would be one more form of procrastination, and I’m procrastinating enough as it is, and besides I’m rehearsing two plays and a half, and I’m rushing to complete a translation, and so you see all I lack is to spend hours making tiny scenery… Still, some day.

Meanwhile, do you think I could rename the method “the TT Draft”? Oh, but I believe I will.

And if you wonder about Tom Walsingham, here you can find Book 1, The Road to Murder, and preorder Book 2, A Treasonous Path.