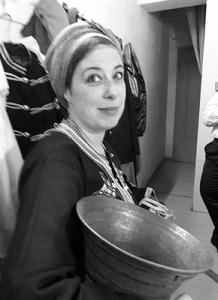 You can see me here in the green room, wearing my Suez costume. The copper water-vessel weighs a ton.

Well yes – the last week or so has been… busy. About A Treasonous Path you know already, but there was also a lot of stage work.

Over the weekend, I’ve covered up for a member of the Crowds in our version of Around the World in 80 Days – my own translation and adaptation, and a jolly, colourful, bustling show, with 24 people onstage, which, in our Tiny Theatre, is no mean feat in itself… But Nina, our Fearless Leader, knows how to pull these things, and Around the World is being a considerable success. As I said, there are Crowds – in Suez, in Bombay, in Calcutta, in Yokohama, in San Francisco… And since this girl was absent, there was a hole in a few of the crowds, and Nina decreed that I should fill it. So I crowded around for two nights and a matinée, doing a water-seller in Suez, and a peddler in Bombay, and a Brahmin woman at the temple of Pillaj, and another woman in Calcutta – whizzing in and out of four different costumes, and having a lot of fun with it. 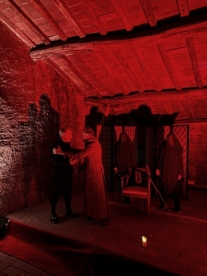 Meanwhile, we’ve rehearsed and done a Halloween event at the neighbouring Palazzo d’Arco – a nifty thing with ghost stories, witchy recipes and literary snatches in several very atmospherically lit corners of the place. Nina mostly directed it – but, about a month ago, she asked whether I’d mind doing a bit of Doctor Faustus in the attic… As though I’d ever turn down the chance to do some Marlowe! So I cut and pasted together a couple of scenes from my translation, grabbed four actors, and off we were! The whole thing worked beautifully (we were absolutely sold out, and the audience reported chills and thrills) and we had great fun spending a good part of Halloween in the attic of a reputedly haunted old palace. We also had, I should add, a very un-scientific moment, when my Faustus and I were keeping company with the Witches in the kitchen downstairs, and sharing fruit and biscuits, and a small copper pan fell off a cupboard for no apparent reason…

And if it weren’t enough, my next Shakespeare project got the green light, and I’m happily recruiting. It will be my first full Shakespeare direction, and I’m nothing short of thrilled. I’ll let you know.

So, you see? A very busy, very happy week.

2 thoughts on “One of those weeks…”