And so it happened that the creative task for week 4 of StoryMOOC was to put together a small video, with a list of one to three books, movies, paintings or whatever that we find especially inspiring – storytelling-wise.

The hardest part, frankly, was choosing just three of them – but the choice was an interesting exercise in itself.

I spent nearly five days wondering: which three pieces of inspiration would I most care to share? Which three books, movies or whatever do I want to recommend to other storytellers? 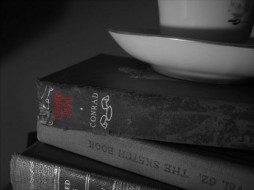 The first one, actually, was very much a given: Joseph Conrad‘s Lord Jim is the book of my life, and the standard of literary quality I aspire to, and an endless source of wonder. It was also an eye-opener the first time I came across it, with its intenseness, psychological depth, poignancy, complexity… It also made me fall in love with English, when I was eighteen – and thus very likely changed the course of my life. All else apart, as a non-native speaker, I rather hero-worship Conrad, who learned English in his twenties, and learned it well enough to become one of its great storytellers… 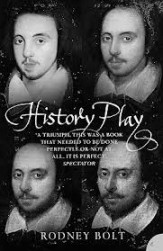 My second choice was less obvious, but I wanted something to do with my love of history and history’s fictional treatment. I dithered between Josephine Tey‘s The Daughter of Time and Rodney Bolt’s History Play… Bolt won the day in the end: his not-quite-novel plays with a growing distance between facts and their telling, documents and their interpretation. It plays with readers’ expectations and trust. There’s a lot of food for thought in this book – especially about the iridescence of history, a pet theme of mine. Besides, I am thankful to Rodney Bolt for sparking up my interest in Christopher Marlowe. 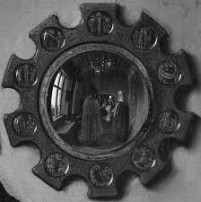 The last item in the list was, as usual, the hardest to pick. So many inspiring pieces, and just one slot left… In the end I settled on a detail from Jan Van Eyck‘s Arnolfini Portrait, the one you can now see at the Portrait Gallery in London. There is a round mirror on the wall, behind the merchant and his green-clad bride. The mirror shows the Arnolfinis from behind, and the window lighting the scene, and the door where the painter is working at his easel – and another small figure: the viewer. I’ve always loved it: the mirror shows the story, the storyteller at work, and the viewer/reader/listener – all together. I find it a perfect symbol for meta-literature and meta-theatre, both of which I love dearly.

So in the end these were the relevant inspiration I wanted to share – all of them well steeped in the past, aren’t they? Perhaps, it strikes me, a rather strange choice for The Future of Storytelling. Then again, I’ve always been more of a keeper than an innovator… after all, the nature of my inspiration comes as no great surprise.