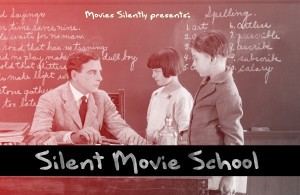 I told you already about Movies, Silently, my favourite silent film blog.

Fritzi, who is also a collector of period how-to manuals on all aspects of silent film-making – and there were quite a lot – thought it would be interesting to share with her readers. In her own words:

Did these books make screenwriters or directors or stars out of their readers? For the most part, no. But they are intriguing pieces of film history and they will give us a peak into the conventions and beliefs of the motion picture industry during the silent era.

Beginning with the introduction to the Palmer Photoplay Corporation correspondence course, the first lesson was quite a delight, and the whole thing promises wonders.

Why not join? I’m sure Ms. Kramer and Mr. Sills, the Headmaster, won’t be hard on latecomers.