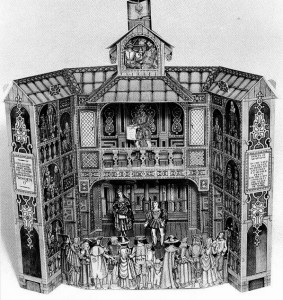 I love toy theatres and I love Shakespeare… Toy theatre productions of Shakespeare, being a combination of two of my favourite things, make me ludicrously happy.

There’s been a time when I thought I’d find some like-minded soul and put together a large toy theatre and a little collection of (much abridged) Shakespeare plays for schools. Well, perhaps not just Shakespeare – but still. I never went past thinking about it – and perhaps what held and still holds me back is Stevenson’s A Penny Plain and Twopence Coloured… While owning three toy theatres, I never truly tried to stage anything in them. Every time I’m tempted to try, Stevenson comes to mind, and what he calls the tedium, the worry, and the long-drawn disenchantment of an actual performance… Well, he says it of children – and I’m a theatre-mad adult now, so much so that, to me, I doubt it could be a disenchantment if it tried… Of an audience of kids, though, I’m not so sure.

I think I would have loved it as a child – but then at eight I was the sort who made up skits and browbeat classmates into staging them. Also, it’s been a few decades since my childhood, and I suspect things have changed somewhat.

Bottom line: I don’t know whether my toy-Shakespeare-for-schools idea will ever grow past its current hazy stage, but one of these days I’ll try some MacBeth or As You Like It or Coriolanus in one of my theatres, just for the hell of it. Meanwhile, let me show you Matthew Powell’s TT production of Act II, Scene 2 of Julius Caesar.