Once upon a time, I went all the way to Jesi with my mentor, to see a seldom-produced opera based off Victor Hugo’s Ruy Blas.

It was my first real two-day opera trip, and I was very excited. I was green enough at the game to blissfully ignore that usually, if an opera sinks into oblivion, there are good reasons… Filippo Marchetti’s Ruy Blas had enjoyed a certain success back in its day (and I’m speaking of 1869), and then was forgotten and never resurrected, until that time when the small and courageous Teatro Pergolesi decided on a revival.

So all the way we went, a tad adventurously, and attended the resurrection of Ruy Blas – together with no more than other twenty opera-lovers… I’d say the experience was rather unremarkable, and indeed it was, music-wise, but as staging goes… well.

In what I think was a wise choice, the production was very traditional, with painted scenery and period costumes, rather lovely to look at. But perhaps the stage manager was unwell that night… Trouble began very soon.

I don’t know how familiar you are with Hugo’s play, but right at the beginning of Act 1 the villain decides to pass off his valet – the hero – as a young cousin of his. To effect the transformation, he has Ruy Blas take off the doublet of his livery, and…

And we were all treated to a view of the tenor in a white tee-shirt. Luckily, at this point the stage business calls for the evil Marquis to give Ruy his cloak and hat, to better pass him off as a Grandee of Spain. Seeing that they were short one shirt, the baritone acted quickly – but… The cloak was one of those with slits for the arms. The tenor, either too concentrated on his singing to notice anything was amiss, or just oblivious, proceeded to thrust his arms through the slits. A bare-armed Grandee, you know.

My mentor, while a witty man in general, had no sense of humour whatsoever when it came to opera, so my stifled giggles earned me an elbow in the ribs. 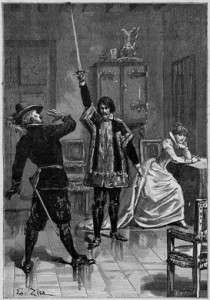 But we weren’t finished yet. Flash forward to Act Three, when having had enough of his master’s wicked ways, Ruy Blas kills him with his own sword. This calls for the tenor to draw the baritone’s own weapon, shove him offstage, and murder is presumed to occur unseen… A pity that the damn sword stuck in the scabbard.

Once again, the baritone tried hard to save the day, steering himself and the murderer towards the wings… But no, the tenor dug his heels, yanking at the sword like a terrier…

And all the time, they wrangled in full view – until the still armed baritone managed to pilot the pair of them offstage…

Oh dear. I admired the aplomb of the orchestra and the soprano, playing on and doing the final scene with a straight face. The baritone I imagined either laughing or weeping in the wings, together with the director. The tenor… well, he played on too – but, considering, I’m tempted to wonder: perhaps he hadn’t quite caught what on earth was the matter?