I drink a good deal of it – five, six big cups a day – with milk, and no sugar. It’s a habit acquired decades ago, during my first Scottish summer, and I’m quite happy with it, thank you very much. And because tea requires some calm to brew and drink, I seldom order it in cafés or suchlike places, where I usually happen in a hurry.

Then one day, last year, I went to a local café with some friends. It was a nice calm Sunday afternoon, and we settled in the garden and decided on tea. “With milk for me, please,” I told the friend who went inside to order for us all. Soon enough, the friend came back, amused and bemused…

“They ask what do you mean with milk,” he said. “I thought it was obvious, but they’re so blank-eyed about it, I supposed there must be some hidden depth I’m missing?”

I raised both eyebrows, and said I meant the obvious and mundane usual, and back the friend went, to explain we meant tea with a little milk on the side. A little later the waiter arrived with teapots and cups and… a very tall glass of foaming hot milk. And fat lemon slices in all the cups – including mine. She looked quite put off when we all stared.

“You said tea with milk on the side,” she accusingly said, and the explanation that it’s either milk or lemon, left her convinced that we must be a bunch of lunatics. We all had a good laugh when she was gone, but I didn’t think of it too much. My village, you see, is not exactly a place of high sophistication – and if tea with milk is hardly sophisticated, it’s true that tea is more commonly drunk with lemon here around, when it’s drunk at all. The people at the café being still rather new to the job, I thought it obvious they had never met this exotic eccentricity, tea with milk. 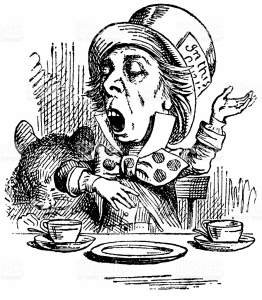 And I wouldn’t have thought of it again – except that last month, in between rehearsals in a small town here around, the director and I went for tea, and again I was asked what I meant with milk, and an explanation obtained me a teapot, some milk, and a cup with a slice of lemon. Only, because the bar was very tall and I’m a tiny woman, I realised this only after I’d poured the milk and the tea… And last week, in yet another place, two very young waitresses did the same number on me on two consecutive days, and every time I earn myself strange concoctions and odd stares. Nobody ever seems to consider the small fact that lemon and milk together, in the long run, make cheese… Or maybe they do, and do not want to cross the deranged lady who drinks cheese tea?

The deranged elderly lady, I guess – because it strikes me that all these people to whom tea with milk is unheard-of and outlandish are very young. Oh dear. Am I getting old? Had I better drink tea at home? Or shall I continue my crusade for tea with milk – and no lemon, please?

4 thoughts on “And no lemon, please…”