I re-watched Mankiewicz’s 1953 Julius Caesar, last night – the one with James Mason, Marlon Brando and John Gielgud – all the more happily because I’d been very much afraid that Shakespeare would disappear from Italian television after the end of 2016.

Of course it’s early days – but let us hope. Meanwhile, I  I was once more struck by how much the play is centred on Brutus, for all that it is titled for The Life and Death of Julius Caesar… Well, certainly Caesar’s death is the centrepiece, and in life and death he deeply affects all the other characters well after he is stabbed in Act 3. Still, Brutus, his doubts and his resolutions are often centre-stage, and I can’t help wondering.

For instance, may the Chamberlain’s Men have been nervous about a de facto regicide as an eponymous hero in 1599? Or perhaps Heminges and Condell in 1623? And, while we are at it, by what title did the play go in its stage days? This I wonder, because from Henslowe’s diary we know that plays might go by different titles. I read a theory about Henslowe recording the Admiral’s Men’s plays by the role his star son-in-law, Ned Alleyn, played in them. So, for instance, Peele’s The Battle of the Alcazar, might have become for this reason Muly Molocco. Now, I don’t quite know how sound this theory is – but I rather like it. Regardless of how much Henslowe doted on his “beloved sonne Edward”, Alleyn was whose name drew the crowds, so it may have made sense to pass him off as the hero – even when he was not? Top billing, you know. 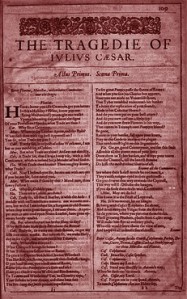 So, might the Chamberlain’s Men have done the same with their own star, Richard Burbage? But did Burbage play Caesar? There seems to be some assumption that Burbage played Brutus – but that mostly because Brutus is the leading part… which brings us back where we started.

I wish something like Henslowe’s diary had survived for the Globe too. Or at least that Swiss traveler Thomas Platter, who wrote about attending “an excellent performance of the tragedy of the first Emperor Julius Caesar” at the Globe, in 1599, had taken the trouble to note down something more specific about the “cast of some fifteen people”…

Ah well, another one of those things we’ll never know for certain. Who played what, who was Shakespeare’s intended protagonist – and, come to think of it, who chose titles: poets of players?