Aeneid, Of Men and Poets, Virgil 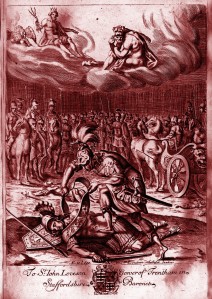 We had Of Men and Poets again, last week. A one-off performance in the small garden of the small Virgilian museum in the small town where we like to think Virgil was born. On paper, it was perfect: the summer evening, the right place…

True, because of a couple of last-minute substitutions, and because it came in between other things, Nina settled on a reading, rather than a full performance. But we’ve done this before: it’s still lovely to see, and very effective, so nobody worried a whit.

But perhaps we should have. Perhaps, by sheer cheerful carelessness, we jinxed it into one of those dreadful times when everything – but everything – happens. Cold wind humming in the mikes and tugging at cloaks and hoods; parchment rolls unrolling the wrong way; lights working badly; music out of place; and most of all, Felicita.

The Great Felicita plays Queen Amata, and is a wonderful, very experienced actress – equally good ad drama and comedy, quick-thinking and smart. And, alas, quite short-sighted. As a rule this is no trouble, but this time they were reading, remember? So imagine the scene…

Lucius Varius and his Greek secretary are onstage, discussing Virgil’s last will. Invisible to the two men, enter a bunch of black-cloaked Shadows, Amata among them. Cloaks billowing in the wind, they glide in place, and… Amata turns on her heel and does an unscripted, unrehearsed exit.

As a matter of fact, she has just seen that her script is not where it ought to be – but of course nobody else knows that.

Lucius Varius, while reading, wonders what on earth…?

I myself, shivering in the first row, wonder what on earth…?

My mother, seeing Of Men and Poets for the umpteenth time, notices the new blocking.

Nina in the back wants to hyperventilate: what is she up to now…?

Clytus, the Greek secretary, carries on with perfect aplomb.

Amata walks back, ethereally regal as ever, clutching her script.

Clytus cannot see the script from where he is, and carries on.

No sooner does Amata take her place among the Shadows again, than she blinks like one smitten by a revelation. Half a turn, and off she sails again – with a quick detour to take back the script.

What now? wonders Varius, and carries on.

What now? wonder I.

Does this mean that Amata’s shadow is more restless than the others? wonders Mother.

Has she gone bonkers? wonders Nina.

Is she coming down with dysentery? wonders Clytus, who still can’t see the ado with the script.

Enter Amata again, bespectacled, and with the script. It’s a different one, her own – 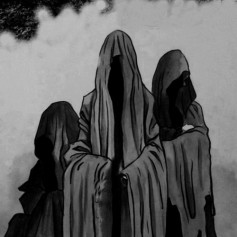 but nobody else knows that. We all watch in perplexity as she pins it in place and glides back among her fellow-Shadows with the grace of a black swan.

Varius is at a loss, and carries on.

Mother is working out the implications of the new blocking.

Nina is fit to have convulsions.

Clytus decides it’s no business of his, and carries on.

When Amata breaks ranks for the third time, it’s clear that Varius would love to hit her on the head with his parchment rolls… He is highly trained, though, and manages to keep from snorting when she takes off her glasses, hangs them together with the script, and then retreats.

Oh dear, he sighs inwardly, and carries on.

Is she doing much more of this? I wonder.

Methinks they are overdoing it a little, thinks Mother.

Nina decides she is going to strangle her veteran actress.

Clytus has long since accepted that such is life on the stage, and carries on.

After which… I’d love to say all goes well, but frankly that wasn’t the case. Felicita found her place, script and glasses, though, and there were no more impromptu comings and goings for the small and chilled audience to wonder at.

What can I say? We’ve had better nights, most definitely – but then again, thanks (?) to the drop in temperature and the fierceish wind, there were not many to see us flounder. Talk of blessings in disguise.

One thing is for sure: Felicita’s strolling Amata will remain in the annals, and comparing notes on it later at dinner, and later still at home, was a hilarious little learning experience. You never know what it will look like from any other side…