I’ve been musing on first favourite poems – and, after some consideration, I’ve come to the conclusion that my first favourite poem must have been Giovanni Pascoli’s Alexandros. Which is a tad strange because, as a rule, I don’t enormously like Pascoli – a late 19th/early 20th century Italian poet with a rather pathetic vein, only saved, in my admittedly biased view, by a keen interest in history.

That said, I was a school-girl of fourteen – a ginnasiale, in my corner of the world – when I stumbled across Pascoli’s Alexandros, and the funny thing is, I don’t quite remember how. Well, yes, it was in this anthology of Italian literature we used in school, but besides that… the romantic part of my brain is positive that I found the poem all by myself, as I leafed through the book during some especially boring lesson; the more level-headed part of my memory insists that our very old-school teacher made us memorise it…

It’s been decades, and I really cannot tell anymore – which is interesting in itself, because I usually have reasonably clear memories of my school years, but not about this. Is my mind playing tricks with this particular memory because of its significance –  only it can’t quite decide which kind of happenstance would make the better story? 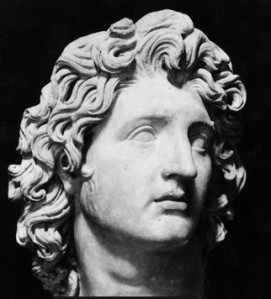 Oh well, never mind – the fact remains that I somehow came across the poem, and it gave me shivers. It tells, you see, about Alexander the Great standing before the Ocean, and realising he is done advancing, conquering, exploring. There is simply nothing ahead: he’s come, for all he knows, at the World’s End – and he doesn’t quite know what to do with himself now. All his life he’s fought, and dreamt of more, and pushed forward, forward, forward… and now what?

Once again, the old theme that you don’t get what you want – or, if you do, you find it’s not what you wanted at all. Only, back then, it wasn’t “old” to me, and it wasn’t “again”. It was a rather shapeless feeling I’d always had – put in fine words and shaped into a story.

And really, Alexander lamenting (in the first person) the end of the journey – which, in retrospect, was far more meaningful than the goal – gave me shivers, and was to have a role in shaping several ideas of mine.

I can’t find an English translation of Alexandros right now. I’ll try harder – or maybe I’ll give a stab at translating it myself, though I’m fully aware it’s not exactly the greatest poem. But it certainly made a lasting impression on my fourteen-year-old self.

4 thoughts on “Alexandros, after all”