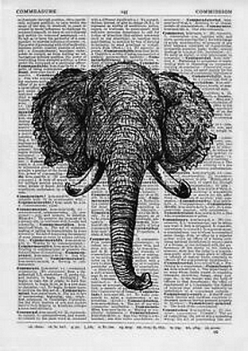 Don’t you think that literature has far too few elephants?

I mean elephant characters, with a central place in the story and a definite personality. You see, yesterday I was discussing Elephant World Day with some friends, and at one point the conversation veered on the literary aspect of the subject – and there was surprisingly little. Surprisingly, when you consider what wonderful, intelligent and meaningful creatures they are – and yet, when you discount those elephants that are merely extras or window dressing, that have nothing to say for themselves, that just walk through the forests, crash into gardens and are hunted, I can think of only a handful of literary elephants. 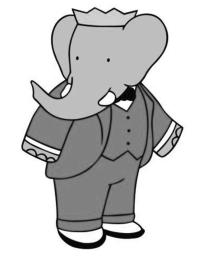 There is Jean de Brunhoff’s Babar, of course – the sweet, wise, Paris-educated pachiderm who comes home to Africa, takes the throne, reforms the country, rules as an enlightened and kind autocrat, and flies in a balloon.  Poulenc himself wrote music for Babar. 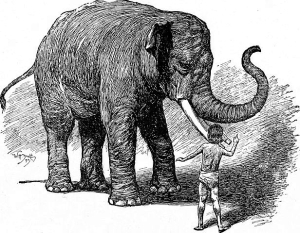 But my favourite writer of elephants has to be Kipling. I love old, wise, grave Hathi from the Jungle Books. Forget Disney’s bumbling Colonel: the original Hathi is a highly dignified character, both embodying and keeping the law of the Jungle. Another elephant leader is Kala Nag, the true hero in Toomai of the Elephants. He is a work elephant who, at night, sheds his chains and leads his fellows – tame or wild – in mysterious ritual dances, deep in the forest. At dawn the elephants go back to their palisades and their work, but always do so of their own free will. Little Toomai, chosen by Kala Nag to observe what his “people” do at night, recognises that elephants can never be slaves at heart – and this knowledge will make him  a leading mahout. Kipling admired elephants, and seemed to understand them. When they appear in his Indian stories, it is always as sympathetic creatures of wonder and intelligence. Just think of In the Queen’s Service, telling the difference between elephants and oxen under fire. An ox will advance obediently in battle, because it doesn’t know enough to fear; elephants, on the other hand, have the intelligence and imagination to understand the consequences of being shot: unlike the oxen, Kipling says, they can extrapolate, question, and choose. 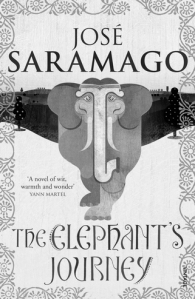 I’m a little less fond of Saramago’s Solomon, in The Elephant’s Journey… Or rather, I’m less fond of the book – and the author. The elephant himself – a gift from the King of Portugal to the future Emperor Maximilian, traveling all the way from Lisbon to Vienna – has no real “character” standing. A pity, because when his thoughts emerge, now and then, they reveal a kind, curious, patient and slightly sentimental creature. I think he could have made an interesting narrator – but for the most part he is just there as the object of everyone’s worries, exasperation, curiosity or fondness. Historical novel, elephant at its centre… it should be right up my alley – but somehow it manages not to be. 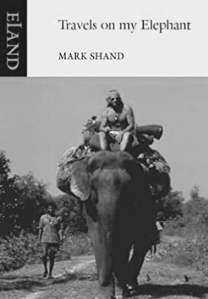 Things go much, much better with delightful, flirty, tender Tara, the leading lady in Mark Shand’s Travels on my Elephant. While we are never privy to Tara’s thoughts or “voice”, she is absolutely adorable, as Shand portrays her with loving eyes and British humour. Really: who wouldn’t love to travel with such a companion?

And… and I’m afraid I can’t think of anything else. Not much, really… 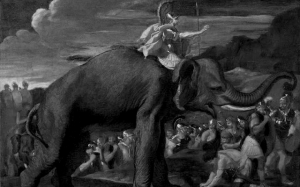 Well, there are historical elephants in the chronicles – like Syrus, “the bravest elephant in Hannibal’s army” according to Cato, and Abul-Abbas, gifted from Harun-al-Rashid to Charlemagne, or Pope Leo X’s white Hanno, and Frederick II’s nameless elephant*… And there are elephants of legend, like Kandula – childhood friend and mount to Sri Lanka’s national hero – and Ganesh, the cheerful Hindu god of merchants and artists. And animated elephants, like Colonel Hathi and his family, sweet flying Dumbo, and the rather alarming Pink Elephants.

But still I think there should be more. It may be that I’m forgetting something… can you think of other literary elephants? Because really, elephants are wonderful, intelligent, highly symbolic creatures, just as fascinating in their rather epic wild existence as in their varied interactions with mankind… So… why don’t we see more of them in literature?

* This one went down in the chronicles as “The Elephant of Cremona” – but I can’t imagine Frederick not bothering to name an elephant. Do you happen to know? Or – if you don’t – here is a game: what kind of name do you think Frederick of Swabia would have picked for his elephant?