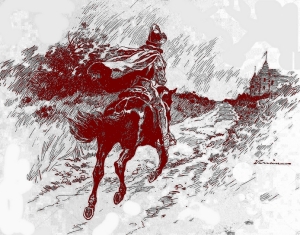 They stopped Walsingham and Paulo, my Italian, whom they seemed resolved to rob [… and] another Englishman in his company, called Skeggs, as I remember.

On the twelfth of November 1581 Elizabeth’s Ambassador in Paris, Sir Henry Cobham, wrote to the all-powerful Secretary of State – and spymaster – Sir Francis Walsingham . It was almost in passing that the ambassador slipped in this bit of information about the misadventure of Sir Francis’s much younger cousin, nineteen-year-old Thomas, riding as a diplomatic courier between London and Paris.

Sometimes it is the small things.

Almost a throw-away, still these lines sketch a vivid vignette: young Thomas, Paulo the Italian, and the man whose name might be Skeggs, held up along the road in Picardy…

And from Sir Henry Cobham’s half afterthought (clearly he didn’t expect Mr. Secretary to be unduly upset by the news), was born Road to Murder, the first book in the Tom Walsingham Murder Mysteries.

Who are “they”? What becomes of Tom and his traveling companions? Just who is the English ambassador’s Italian? Are you curious yet?

I’ll keep you updated about The Road to Murder!

Sometimes, instead, it’s just housekeeping: a new page about Tom’s adventures – rather a work in progress, due to the state of things looking much like this post for now – and things have also changed on the Clara Who? page.