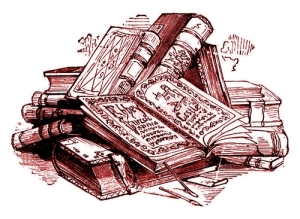 So they’ve been tidying up the Company’s extensive collection of books, plays and whatnots over the summer – and, as has become the case these past few years, everything and anything that isn’t in Italian has been set aside for me.

And I really mean anything: I once ended up with a book of plays in Serbian. Nobody had an inkling of when, how or, more relevantly, why on earth it had landed in the Company’s library – but, quite regardless, it went in the “Clara” box. That I don’t know a single word of Serbian didn’t seem to matter much. For the record, the book is still somewhere in my shelves – obviously unread but there…

Anyway, this time the rummaging/tidying must have been more thorough: my hoard contains no Slavic eccentricities, but is rather huge. And it is full of lovely things, too…

– A dozen numbers of Theater Crafts from the Eighties;

– A programme for Sean O’Casey’s Juno and the Paycock at the National Theatre in 2011, together with the much older Coles Notes for the same play;

– Some Brian Friel: Dancing at Lughnasa (which I know the Company staged at some point), Give Me Your Answer, Do (edited by Peter Fallon, who happens to be a friend), and Ulf Dantanus’s Brian Friel, A Study;

– A delightful unused Royal Opera House diary for 1986 from Harrods;

– Well-thumbed photocopies of Thomas Kilroy’s The Secret Fall of Constance Wilde, together with leaflets for the same play at the NT;

– A gorgeously illustrated (and huge) hardback “The History of the Theatre”, by Robin May;

– Photocopies of Alan Ayckbourn’s Wildest Dreams. The attached accompanying letter – from what I gather was a theatrical agency in Rome, also mentions other four more plays that aren’t there. Perhaps they’ll surface and float my way the next time someone goes rummaging;

– A rather battered 1957 copy of Jules Renard’s Théatre Complet. In French. This one makes sense, though: unlike Serbian, French I do know;

And now, quite possibly my favourites:

– A small guide of “London’s Theatreland” from 1971, with bits of history, maps, photographs, and colourful illustrations;

– The Spring 1987 number of “Southwark Globe”, the newsletter of the International Shakespeare Globe Centre, gleefully announcing the long-awaited planning permission from the Southwark Council Planning Committee. There are also a lively column by Sam Wanamaker himself, letters to the editor (ostensibly Sam again), and Globe Centre news. Did you know that Douglas Fairbanks Jr. was for several years the Centre’s director and then a trustee?

– A leaflet touting rather pricey Globe-themed jewelry that the Centre sold to raise funds.

As I said, absolutely lovely. I like it when people take it into their heads to go rummaging… one never knows what will arrive in the Clara Box.