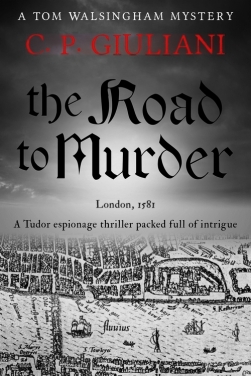 The Road to Murder is out.

Really out there, ready for reading, in kindle and paperback formats. Thank you to all who preordered: now you’ll find what it’s all about. In a very significant way, Tom’s adventures truly begin today, when he meets his readers. We’ll see how he fares with brigands, spies and murderers – and they come at him in plenty, because…

In late 1581 Tom Walsingham is 19: he bears a weighty name, and has an apparently dull mission. Escorting to Paris the Queen of Navarre’s new English glover would be a dreadfully boring task, if Tom weren’t also carrying secret dispatches for his powerful spymaster cousin. Still, the miserable weather, and the glover’s endless whining seem to be worst that can happen – until they aren’t.

Those brigands, spies, and murderers I told you about? Well, let’s just say that soon Tom will be sighing for the time when the rain and a few days’ delay were his worst troubles…

Are you intrigued yet? You can find The Road to Murder here.

And now… and now I’m tempted to spend the rest of my day glued to Amazon and Goodreads – as though reviews were to magically bloom already… But no, let’s be wise and sensible. Let’s go back to the finishing touches to Tom’s second adventure, A Treasonous Path – which is, by the way, up for preorder.