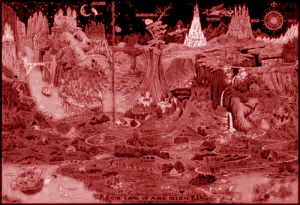 Am I very wrong in thinking that make-believe must be the most universal of all childhood games? We all traveled to far-away worlds, didn’t we? And made-believe to be this or that in castles, jungles, and star-ships? With or without dolls, toy soldiers or plush animals, alone or with other children, recreating stories heard, or making it up, rehearsing work, motherhood, war, fear, society – always halfway between a technical test of life and unbridled What If… END_OF_DOCUMENT_TOKEN_TO_BE_REPLACED 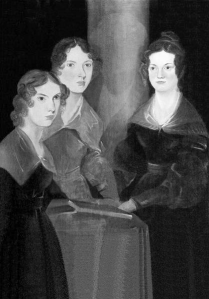 I consider myself very much a Brontë fan – a love sparked both by the sisters’ novels and by Juliet Barker‘s fine, huge, rich, incredibly detailed biography of the whole family. By and about these three extraordinary sisters and they wayward brother, I’ve read all I could lay my hands on – including all the Angria&Gondal juvenilia published so far – and I’ve written a monologue in poor brother Branwell‘s voice…

So yes, I consider myself a far gone Brontëite.

All the same, I had never realised, before reading this article by Imogen Russel Williams*, that one has to be either a Jane Eyre person, or a Wuthering Heights person. To say that one can’t be both may sound a tad extreme – but think of it.

Think of yourself: chances are that, if you like Jane’s independent streak and (mostly) quiet rebellion against convention, you cannot stand Cathy and Heathcliff’s over-the-top – not to mention deadly – histrionics. On the other hand, if you love wild Cathy and brooding Heathcliff, and their stormy love, you are likely to find poor Jane more than a little insipid.

This came as something of a revelation to me, and had me chuckling as I recalled to mind a good number of bookish conversations… Just think of anyone you’ve ever talked Brontë with: there must have been the moment when someone waxed lyrical on either JE or WH – and someone else pointed out that yes, yes, but there is no comparison to the other sister’s work.

And Anne? Poor Anne – nobody ever seems to care much about Anne. It is a little hard to imagine rabid readers at each other’s throat over Agnes Grey, or even The Tenant of Wildfell Hall – although, back in the day, the latter caused a good deal of scandal, and was labeled as extremely coarse and vulgar. Little, quiet Anne had a trick of tackling highly unpleasant themes in a singularly unromanticized way that shocked a little even her sisters. She seems to have been a gutsier and more mature writer than both her sisters – and yet, how many Wildfell Hall persons do you know?

Instead, according to Imogen Russel Williams, you are likely to know quite a few Wuthering Heights fans, and a handful of Eyreites: it would seem that wild lovers in windswept moors carry more force than plain and stubborn little governesses. I cannot say I’m dreadfully surprised.

Myself, I side with Charlotte – and while I rather prefer her later works (with a predilection for Shirley – so sue me), I’ll take Jane over her sister’s Cathy&Heathcliff any day of the week. Much as I love the notion of Emily still playing make-believe in her late twenties, I cannot help myself: I find all of her characters, especially her leads, extremely unpleasant. If I must have any sympathy for anyone at all, it is for poor Edgar Linton – and I’m sure that wasn’t Emily’s intention…

And how about you, o Readers? The world being thus divided, whose side do you take?

* And isn’t this a lovely, novel-worthy name!