One of my last forays on a stage was to play the double role of Beatrice of Bar and a peasant girl in a historical play about Beatrice’s daughter, Mathilda of Tuscany – the great lady of the Italian Middle Ages.

It wasn’t exactly my idea – but the company was one Beatrice short after a last minute forfeit, and the peasant girl was thrown in for good measure, and I’ve never been terribly good at saying “No”…

Anyway, to make a long story short, I was there when Mathilda – Woman and Countess, was played, very appropriately, before an 11th Century church originally funded and founded by Matilda herself.

We had someone really good taking care of the lighting, and a suitably windy night – enough to stir the many cloaks, but not enough to mess with the mikes. So the play was lovely to look at, and we were all rather happy with the result.*

And after it was all over, I stood there with the director (who had also worked with my Carthaginian play) watching the lovely romanesque façade, as the crew took down the lights. It was a beautiful sight. 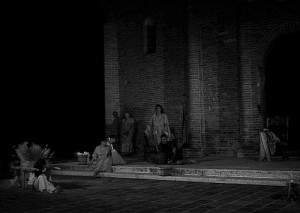 “See?” the director asked, pointing. “Your Hannibal, he left behind nothing of the sort.”

Which – as I admitted then, and have no trouble admitting now – is absolutely true. Hannibal didn’t leave behind anything of any sort, when it comes to brick-and-mortar – except perhaps the town of Artashat, that he may have designed for a king of Armenia, but even supposing it is true, the ancient Artashat now is less than ruins.

And this, theatre-wise, makes Hannibal by far the most interesting of the two – or, at the very least, the more tragic.

Come to think of it, there are similarities between Hannibal and Mathilda. Both were born to rank and privilege, both soon proved exceptional, both took on their roles very young, both had remarkable fathers they lost early and far exceeded, both played pivotal roles in the clash between the two great powers of their time, both left no heirs…

But Mathilda died leaving a reasonable approximation of peace and all kinds of tangible legacy, and having accomplished much of what she’d set out to do, after reigning for many years. Hannibal, on the other hand, died a defeated, hunted, betrayed exile, took his own life to avoid capture, and left… nothing.

Nothing except a name that even his worst enemies admired – if grudgingly. Nothing except tactical notions that are still studied in military schools all over the world. Nothing except, and here is a paradox, the greatness of his enemies – because it was with the II Punic War that Rome graduated from power to Power.

And so, I’m sure Mathilda was a very remarkable lady – but my heart and my imagination root for the man who, defeated and with no monument to leave behind, managed to throw his name across more than two millenia – out of sheer, burning, titanic greatness.

* Well, with the possible exception of the author – another playwright, who never forgave me for saving the performance by stepping in at the last moment… But this is another story.

Exactly two thousand two hundred and thirty years ago, near the city of Cannae, Romans and Carthaginians were facing each others, ready to fight one of the greatest battles in history. Well, they didn’t know that – or at least, the Romans didn’t. Sure in their strenght and greater numbers, consuls Aemilius Paulus and Varro were confident that they’d finally give the Carthaginian usptart what was his.

But Hannibal? He must have known the battle he had designed was a tactical masterpiece. Certainly, he didn’t expect it to be his last great victory in the field… In the end, Cannae was his masterpiece and the high point of his flaming parable, and part of his intangible legacy – considering his tactics are still studied in military schools all over the worlds… Who knows, how would he like to know that in spite of losing his war, he won some sort of immortality for himself?

Oh, never mind me. I’m more than a little in love with the man – I’ve even written a novel about him. Well, two novels, technically. And a play, which I’m going to rewrite, because… because. And there are at least a couple of stories and a monologue still to be written…

And meanwhile, yes – today is the 2230th anniversary of Cannae, and here is a nice depiction of Cannae according to the BBC.