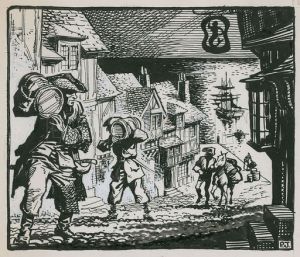 Come to think of it, there’s a good deal of fiction set in XVIIIth and Early XIXth Century England that deals with smuggling… Daphne Du Maurier‘s Jamaica Inn, Georgette Heyer‘s The Unknown Ajax and The Talisman Ring, Rosemary Sutcliff‘s Flame Coloured Taffeta, and Russell Thorndyke’s Doctor Syn novels come to mind – but there are many more stories of the Free Traders, or Gentlemen, as they were commonly called, sneaking into England such goods as French liquor, silk and lace under the noses of the excisemen… END_OF_DOCUMENT_TOKEN_TO_BE_REPLACED