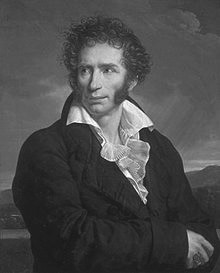 The tragedy was very high-minded, very Greek in conception, very long-winded, and the audience was thoroughly bored – until a herald stepped in to announce the arrival of “Ajace, Re dei Salamini,” which translates to “Ajax, King of the inhabitants of Salamis”* but unfortunately in Italian sounds exactly like “Ajax, King of Little Sausages”…

The audience jumped a little, there was some coughing, those who could not quench a guilty snigger were hushed, and on the players went, pretending that nothing had happened. And actually not much did – at least on the stage, because if anyone had hoped the tragedy would acquire some rhythm or momentum, they were to be disappointed. Endless monologues and tirades, and more monologues, and more tirades, in which a scant cast of characters kept reporting events happening offstage, and commenting, and sulking, and cursing, and raving, and variously yielding to despair in exquisite verse – and there were five acts of it.

By Act Five, the patience of those who had not skulked away was wearing thin. So now imagine Teucer, Ajax’s half-brother, taking centre-stage in chiton and buskins to address the crowd thus:

And never mind the inhabitants of Salamis – “O Little Sausages” was what the audience got, and by then they were too bored to politely pretend it was not funny. The whole theatre exploded in laughter at last. The players did try to forge ahead, but honestly, how do you play tragic stuff before a cackling and hooting crowd? So the first night was a disaster, and there was no second night because some less than complimentary allusion to Napoleon was detected in the play. Ajace and its author were banned from Milan – which, considering, perhaps was just as well. 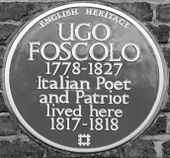 Whether Foscolo had truly not considered the consequence of the Sausages, or he had – and then decided that those who could mistake salamini and Salamini were not worth worrying about, I don’t know. Foscolo being Foscolo, I rather believe it was the second hypothesis… And still, he very much blamed the flop on the thick heads and general ignorance of the Milanese…

It took another near-flop, two years later, to convince him that he was not made to write for the stage – so he went ahead to write poetry, meddle with politics, translate classics and be incendiary. In 1916 he fled to England, where he wrote, taught, made debts, behaved arrogantly and lived until his death in several, shabbier and shabbier London neighbourhoods with his long-suffering half-English illegitimate daughter.

* It strikes me that “King of Salamis” might sound rather ludicrous in English too – but less obvious than Foscolo’s Italian equivalent.

3 thoughts on “Ugo and the Sausage King”