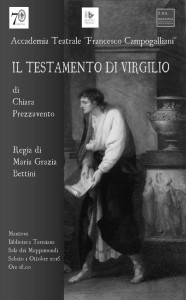 In ten days or so, Nina’s people are going to play Of Men and Poets again, in the tiny theatre where it was born. Not the place where it debuted – but the one where it was first put together… Well, yes, Of Men and Poets (codename 2P) has had its share of adventures, including a first night cancelled thanks to the last real snowfall hereabout, five or six years ago…

Anyway, we’ve been reminiscing, Nina and I, and the actor who plays a (wordless) Aeneas, and other Virgilian memories keep cropping up. Like the conference-speaker who arrived from Rome demanding someone to prepare his Powerpoint presentation for him, and someone else to read aloud four poems during his talk. Four long poems, in English, during a twenty-minute talk, before a mostly non-English speaking presentation. The conference people tried frantically to dissuade him: nobody would understand anyway, the poems together took about a quarter of an hour to be read, and could he explain quite what their relevance to his argument was?

In the end, and with the worst possible grace, the man reduced the poems to one – but on that one, Allen Tate’s Aeneas in Washington, he was adamant, and so someone suggested that I should read it – since I was there already, translating for Seamus Heaney… So yes, I ended up – with very little warning – reading Allen Tate before Seamus Heaney, as well as a full auditorium. 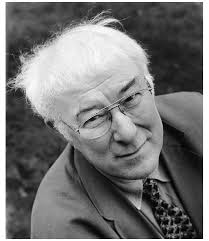 I think I must have made a deer-in-the-light expression, because Mr. Heaney patted my shoulder and whispered in my ear that I’d done more harrowing things. “Remember when I received the Premio Virgilio, the year before last, and I forgot to give you the text of my speech beforehand, and you translated as I spoke?”

Which I had, and it had been very much like the flying trapeze – with nary a net in sight: terrifying and glorious…

And because I hero-worshipped Mr. Heaney, and I would have jumped off cliffs at his bidding, go ahead I did. In the end, no one quite understood why Aeneas had to be read at all, since the talk barely mentioned Tate – but I managed to do it without entirely disgracing myself, and Mr. Heaney was very nice about it, and it is a beautiful poem anyway. So, although it was a bit like the flying trapeze again, it also turned out to be a lovely experience, and a memory I’ll cherish. Go figure, I’ll end up having to thank the unreasonable speaker, sooner or later.