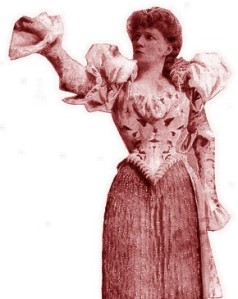 So… I’ve gone back to acting.

Well, not really. It’s not that I’m going to take up acting again. Rather, I’ve acted again after… what, twenty years? It goes like this: as a teenager I decided that I wanted to be an actress, and began to take drama classes when I was sixteen. I happened to find a very, very good teacher – one who had the patience to draw me out and drill me hard. With rather good results, if I say so myself. I worked hard at it for four or five years, thinking that I’d go on with it, and go professional…

Until I realised that I wasn’t good enough. Or, rather, I was just that: good enough – not quite something to stake my future on. One can be good enough at things to do in the weekend – not at one’s art. So I went and studied International Law instead (which I loved), and kept writing, and then life took quite a few unexpected turns, and… well, to make a long story short: in time I ended up writing for two theatre companies, and learning various kinds of backstage work. And when you do this kind of thing, it’s not unheard of to understudy smaller parts, or step in at the last minute to cover for some missing bit-parter… But I did it as little as I could, because I found I didn’t like it that much anymore, and in time stopped altogether.

That is, until last summer, when I wrote Shakespeare in Words for the Squirrels, and the actress who should have played the Chorus gave up – and we had no understudy, and suddenly the play was in danger of fizzing out… 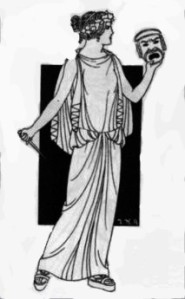 “You must do it, Clara,” was Gemma’s verdict. “You must play the Chorus.” Gemma the Director. Gemma who had been my teacher back in the day… And because I trust Gemma, and because there was no one else to do it, and because I more or less knew the part by heart already… I did it. I swallowed my doubts, my anxiety, my panic – and I went back to acting. To play a substantial part for the first time in more than twenty years.

It helped greatly that Gemma was there to steer, nudge, drill, scold, soothe, yell at me. It also helped greatly that, at the time, I was writing about Elizabethan actor Ned Alleyn, because through what I wrote about acting, I could clarify and explore and discipline what I was doing (or trying to do) on the stage. And it helped – more than I could have imagined – that the Chorus wears a wonderful copper mask. And something else that helped were those twenty years that had passed: one grows quite a bit, in two decades, and thinks, and sees, and learns.

And this is how I went back to the stage – and if I was thoroughly panicked at first, I found my legs again, and enjoyed it immensely, and even had some success.

Now I’m not sure that I’ll go on. That I’ll go back to it entirely. Well, Shakespeare in Words, obviously – for as long as we play it – but other than that… I’ve found my place backstage, now, and I’m very happy in the wings, at the lighting board, at my computer, in the rehearsal room. In a way, as a young girl I thought that acting was my dream – while actually it was theatre as a whole. The whole gig – not just playing, but the making of it. So perhaps acting is part of it, and who knows: now and then, if I find the right part, I might?