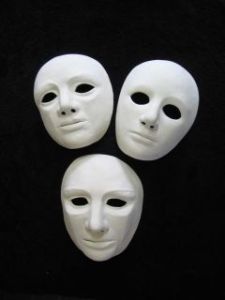 I think I have hinted at the mask that, as the Chorus, I wear in Shakespeare in Words. Well, it’s a lovely copper-coloured thing that my friend Alchemilla made – and it had a stormy beginning.

In fact, that there is a mask at all, is the result of an artistic disagreement between Gemma and myself. The whole cast of SiW wears minimal black, you see – and it became obvious early on that the Chorus, the timeless, manipulative and cruel person who talks circles around everyone else, needed a distinctive, non-black element. At first it had to be a large shawl, to be worn in different manners as the Chorus went through its different roles. And this seemed to work tentatively – until

one day, out of the blue, Gemma glowered at me, and asked what did I think to use as my distinctive element. Wordlessly held up my shawl, and Gemma scowled deeper. “That evening thing?” she scoffed. “Fiddlesticks. What you need is a mask. One of those wonderful Greek masks.”

I said that no, no and no. I was an Elizabethan chorus, not a Greek chorus, and the difference called for no mask at all. So Gemma said that I’m all stuck up and full of defences – always have been – and it showed  in my acting, and yes, I absolutely needed a mask. To which I retorted that stuck up I may be, but I’m also the author, and therefore I know what sort of chorus I’ve written, and then the thing escalated into a minor row, and at the end I drove home fuming with contrariness and outrage…

Except, you see, Gemma has this annoying habit of being mostly right… the more I thought about it, the less I disliked the notion of the mask. Not a Greek mask – that was out of the question – but still… And so I began hunting for the sort of thing I had in mind, the right, non-Greek kind of mask. I wanted it to be hand-held, copper-coloured, enigmatic. And I clearly came to the conclusion that the only way to have it, was to make it. 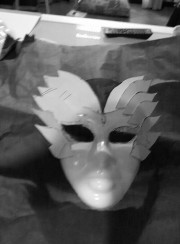 So I turned to Alchemilla, artist and craftswoman and good friend – and she knew how to go about it. So we began to sketch, and prowl the web, and compare notes, and in the end Alchemilla set to work on what looked like a good idea.

By then it was time to publicly concede (partial) defeat. The day I brought a white neutral mask to rehearsals, Gemma said nothing – not even when I began my lines behind the mask, and… it happened. Until then, I’d floundered a little, done well enough, tried different things, weathered ups and downs. The moment I had the mask, the Chorus found itself. It (I) really became the timeless, manipulative, cruel creature it was meant to be. It was glorious.

Gemma only raised an eyebrow, nodded her chin at the white mask, and asked was that what I was going to use? I said no, and she went back to work, and from there on, things took shape, and I began to panic a good deal less about acting again after twenty years.

Meanwhile, first night was approaching fast, and the absent Copper Mask (having acquired capital letters) became a bit of a rehearsal ritual. “Is it ready yet?” someone would ask daily – and the answer was always “No, have patience”. I believe Gemma and the Squirrels all thought I was playing with their expectations for maximum effect or something – but the truth is that there were a few setbacks and delays, and in the end the mask was ready just in time for first night.

Which proved quite perfect. The moment we prepared in the not-quite-wings, and I truly  raised the Copper Mask before my face for the first time (as opposed to trying it on), with the audience’s buzz dying down with the lights, was pure magic. Suddenly I felt timeless, and manipulative, and cruel – and perfectly safe. I hadn’t truly acted in front of an audience in more than twenty years, but really: nothing could go wrong behind the Copper Mask.

And nothing went wrong – indeed, everything went gloriously well. Theatre, and the power of masks, and Gemma being right, and the golden feel of a captured audience, and all that. I’ll say it again: it was glorious. But would I have walked into the lights with the same easy confidence without the Copper Mask?

Somehow, I doubt it.

4 thoughts on “The Power of the Mask”