And so the second run of our CC is nearing its end: four more nights now, and we’ll be done for the season.

And you know what? I’m going to miss it terribly. It’s been an intense and very successful affair, sold out from the beginning, with the box office besieged with calls well after all the seats were gone (why, one particular lady called last Saturday, during the show – begging for eight seats, no less…), ticket-less people turning up every night, queuing in hope of a last-minute seat, and a number of very good reviews…

And the way each and every time, once Scrooge is redeemed, and the Spirit of Christmas Present has tied up things, and The First Noel has been sung, the lights go on to show a house full of happy, wondering faces, and not a few glistening eyes. 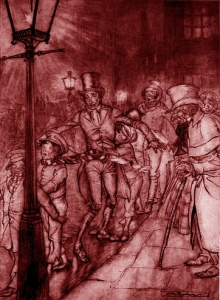 And my Little Shakespearean – my imaginary godson – making his official debut as Tiny Tim… and making it quite, quite well. I thought I’d burst with godmotherly pride.

And the warm, happy, glowing quality of backstage life… It’s not that we don’t have small accidents, tensions and the occasional spat – just like every other show – but the general mood is absolutely wonderful. One night, my mother came knocking at the green room’s door in search of her only daughter – and when the door opened she found herself confronted with a smiling, fully costumed, happily chattering, quite Dickensian crowd… “It was like stepping into the book,” she said.

And sitting backstage for the Quick Changes, night after night,  listening to the play, and to the audience, and to the wonderful, glimmering whole, and being intensely happy about it all… 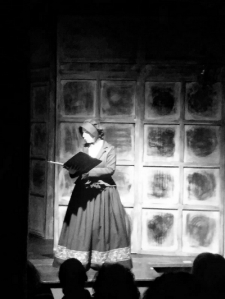 And – well: not always backstage – or at least not all the time, because… a few weeks ago Marcello, who plays Dickens himself in the prologue, had to miss a Sunday matinée. “You’re stepping in, Clara,” Nina decreed. And when I pointed out that I could hardly play Charles Dickens, she looked me over, and thoughtfully said: “No-o… Make up something.” So I thought of Mrs. Oliphant reading aloud the Waverley novels to groups of illiterate girls, and made up Ruth Grimshaw, a spinster doing something of the sort in 1843 London. Ruth became the alternate prologue, and was successful enough that I ended up playing her five times instead of the one. It was terrifying, exhilarating, and altogether wonderful.

And on New Year’s Eve we had a surprise: unbeknownst to all, our electricians mounted a snow machine in the battens. Imagine a whole cast of twenty crowding a small stage, a heartbeat before singing carols – and… it starts to snow! Imagine the marveling, smiling faces, the sheer, glimmering joy of the moment. And imagine a head electrician sitting at the lightboard, beaming at the wonder he had worked. It was… there’s no other word for it: it was magical!

And now I’m back to backstage work for four more nights, and then it will be over. Not entirely over, mind: the run’s success was such, and the unfulfilled requests so numerous, that we’ve already decided to put on another run next December… Still, it will be a little sad to step out of the the bustle, the excitement, the glow of it. As I said: there’s something magical to this show – and I’m going to miss it fiercely.