Summer night, warm and damp to the point of stickiness. The lights are doused, and the chattering dies down to a trail of whispers. For a handful of moments, I can hear the crickets in the trees all around the theatre. One of those handfuls of moments calculated to break just when the audience has forgotten to breath – but I’m just eleven, and innocent of this kind of calculations. 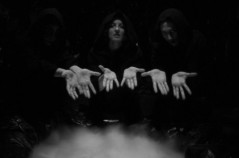 Suddenly comes a shaft of purplish light, then follows the bang of a trapdoor opening – then the witches climb onstage in a whorl of black rags and cackles, and run to crouch around the cauldron…

“Way to start,” mutters A., in the next seat. And although she is thirteen and bewildered, she is right. Far more than she knows.

I am eleven, as I said, and this is my first Macbeth. My first Shakespeare. My first time at the Teatro Romano in Verona. My first less than traditional production. I know who Shakespeare is, but I never saw anything of his staged. As far as staged things go, my experience boils down to some children’s plays and a few nights at the opera – very traditional-minded productions. I’m not prepared for a tale of Medieval kings in Scotland changed – no, distilled to an affair of empty stage, shadows, cutting lights and nondescript, black costumes.

I’m not even sure I like it all that much. Why, truth be told, I’m rather disappointed. Everything is so grim, so dark, no tartan sashes, no cloaks, no swords, no crenellated towers, nothing of what I had expected…

And then, little by little, with no bells and whistles to keep my attention, I start to concentrate on the words. Not just the plot, but the way the words make the plot different from its synopsis. Yes, yes, the witches, the prophecy, the regicide, the folly, the defeat – it’s all there. But the creeping fear and guilt, the hoot of the night birds, the ghost, the blood stains that won’t go away, the boughs from Birnam Wood closing in… it all takes life from the power of the words, in a way no painted scenery, no elaborate costume could ever convey. And not just life, but truth.

And mind you, when we file out of the theatre I’m still eleven, and not entirely convinced of what I saw. I still much prefer crenellated towers and period costumes, and I secretly hope all theatre needn’t be like tonight, thank you very much. And yet, when Father asks did I like the Macbeth, I say yes, and it’s not a complete lie. I may not have liked it in the usal sense of the word, but I know I’ve gone through some rite of passage. A door has opened on something that I don’t fully understand yet, but looks meaningful. Something that has to do not only with tales, but the way tales are told. Something that I want to understand – and learn, if I can.

More than twenty-five years later, I know that what Shakespeare taught me that night was the power of words. A similar production of a weaker play would have just bored me to tears, but because Shakespeare’s words were so powerful, the young girl I was grasped the essence of the story – and something else too: a hazy notion that, while the production and the acting were modern interpretation, through the words the long dead Shakespeare was still speaking to me across the centuries.

It was very hazy back then, I grant you, but it was to grow, branch out, develop into several tenets of my faith in words, when it comes to history, literature, and writing. Not bad for one shakespearean night, was it?