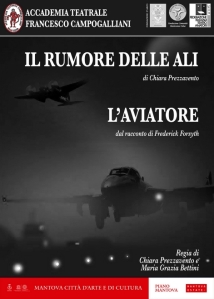 And tonight we debut Il Rumore delle Ali – that is, The Sound of Wings – my own Amelia Earhart play, the one I’m co-directing together with Nina…

As usual, I want to emigrate to St. Helena, and the natural condition of theatre, and all that – but, for once, not really. We had dress rehearsals last night – well, tech rehearsals and then dress, in quick succession – and  it was all the tiniest tad Noisesoffish, in that I’d be hard put to say which was which – but in spite of that, it all went… dare I say it? No, I don’t, of course. One never does, for fear of jinxing things. Let us put it this way: when I say that I want to emigrate to St. Helena, I might be slightly overstating the case.

That said, at one point I was scurrying this way and that, juggling desk sets and coffee things, and trying (and, I suspect, failing) to convince my Amy Earhart that the very, very essential set design is quite deliberate, and giving last-minute pointers to my very young USCG Lieutenant, and handing out the carefully printed Press passes to the Reporters Three, and trying to decide with Nina how a certain lighting effect would look once it was truly dark…

Fiorenzo was there, the journalist and pilot who put us up to staging flying stories in the first place. For a while he watched us running around like ants, and then came to stand beside me before the stage. “Well,” he said. “And this is one of those passions, too!”

Between Press passes, and little Lieutenants, and no, Laura, we won’t add a side table now, I stopped and told him that yes, I guess that, for us, it is very much the same as flying must be for him. He nodded, and, presumably finding it a satisfying answer, went back to sit in the audience. 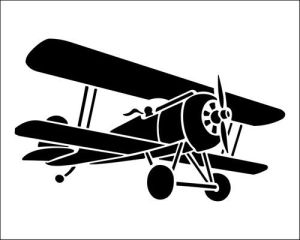 It’s just like flying. It is, reportedly, what a seven-year-old Amelia Earhart told her mother after doing a dangerous, potentially neck-breaking stunt. It’s just like flying. And yes, we don’t actually leave the ground – but we do fly over oceans, and balance a painstaking care for detail with sweeping leaps, and traverse worlds, and navigate the immense spaces of the human mind, and take risks, and explore, and sometimes fail and begin again from scratch, and when it goes really well, we soar.

So yes, theatre is wonderful, and challenging, and occasionally dangerous, and dizzying, and utterly addictive.