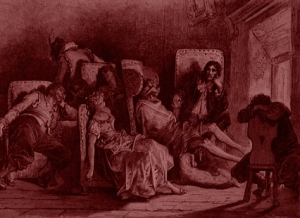 Us – after dress. Or tech. Or whatever it was.

So the play opens tomorrow night. 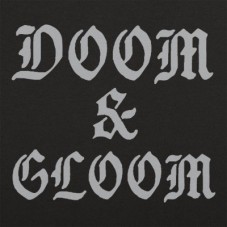 Because the lights were still going by wobbly trial and error, last night, and Lt. Marks still gets his lines wrong, and the Reporters Three still aren’t half the pack of hungry jackals I want them to be, and we were somehow short a chair and a telephone, and the understudy for McKay mostly wandered about, lost and forgetful, and nobody brought in the coffee things, and I had to wander off in the blackout darkness to get them myself, and Nina nixed my costume after all, so we had to ransack the wardrobe for something else, and I called Fred “George” and George “Fred” – or so I’m told, because I never noticed, and Amelia still hasn’t fully recovered her voice, and there aren’t many bookings anyway – not that it’s just us, because people seem to be quite leery of theatres in general, but still –  and some old hands say that it’s all because we are opening on a Friday night, and Friday openings are bad luck, and we never open on Fridays, but this time there were circumstances, and also the Ghost Countess doesn’t like it when we do ghost stories, and we’d need another week at the very least, and …

And yes, yes – I know. The natural condition of theatre, and all that.

I know, really, I do – or I ought to, since I’ve been doing this, on and off, these thirty years – but still. I drove home in a blue mood, last night, after spending four solid hours running about, stage-managing, scolding people, changing into dress after dress in the cold, cringing at lighting experiments, flitting between stage, green room, wardrobe, backstage, lighting board, and stalls, and stage again, feeling my way in the dark for the coffee tray… oh yes: and playing Bea.

So now I really could do with a Henslowe to remind me of the last part, the good part: that nobody knows how, but in the end it all goes well – altough I have to say that, if all really goes well tomorrow night, it will be a bigger mystery than most.