Do you have any particular liking for postage stamps, o Readers? I don’t, I must say.

My father was a stamp collector. When I was very young, he tried to share the hobby with me – and failed. All I remember are endless sessions sitting at a table covered in green felt, being scolded for breathing too hard on the silly little paper squares…

As a rule, Father knew what grabbed my interest, so I can’t imagine why he never thought of really showing me what the silly little squares depicted… I was the sort of child that would have loved history- themed stamps, or literary ones, like the British stamps from the collection of James M. Hutchisson, to be found at this link. But, what can I say? Father didn’t pursue this particular avenue, and in fact soon gave up any notion of drawing me into stamp-collecting. 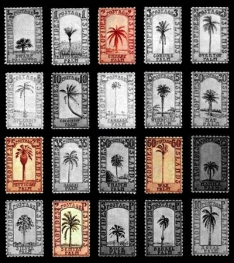 I grew up happily stamp-less, and it wasn’t until years later that I came across the concept of imaginary stamps. I remember reading a story about this author who, as a child, began to make his own stamps, oodles of them, commemorating the historical events, relevant people, places, flora and fauna of the countries in his make-believe world. And wasn’t that wonderful? For the life of me, I can’t remember who the writer in question was, and even the usually All-Knowing-Web is no great help on the matter. I have found this article about American artist Donald Evans, who apparently began his career by playing a similar elaborate game as a child… Equally fascinating, and similar in many respects – but I don’t think he is the man I have in mind. All else apart, I could swear that “my” stamp-maker was French, and a novelist in later life… But I could be wrong. I’ll try and find out. 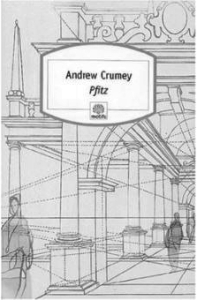 Still, whoever it was, I found the idea absolutely beautiful. Lending a sort of tangibility to a make-believe world, one small square at a time: beautiful, intricate, imaginative… I wonder if Andrew Crumey knew about imaginary stamps when he conceived his delightful Pfitz, with its German prince “building” imaginary cities on paper, each complete with historical records, tax rolls, plans, library catalogues… everything except the actual city.  In a way, the stamps game is a miniature version of this.

A version I would have loved to play as a child. Only, because I never could draw, I couldn’t have anyway. What I did play at, was historical records. Because yes, I did “have” several make-believe countries – mostly tiny Ruritanian places, with a dash of fantasy elements during my Tolkien period – and loved to fill whole notebooks with chronologies, lists of treaties and battles, library catalogues, national anthems, theatre seasons, and even a play or two by a leading playwright…

But the stamps never came into it – and I find myself, retroactively, a little sorry. I wonder what my father would say.