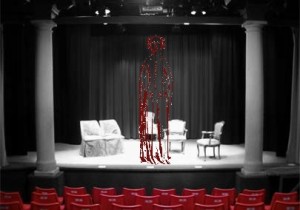 So, the Ghost of Agnese Visconti haunted the stage of the Teatrino D’Arco last night, and it was a lovely thing.

They were all very good – the bewildered poet and the characters in his head, and the Lord of Mantova was played with great flair and just the right touch of humour, the bewildered poet. And the actress who plays the Ghost was truly excellent: she captured poor Agnes to perfection, all the waspish impatience towards the poet who sugar-coats her story, all the urgency of her bid for truth… Because in the end this is what the play is about: the age-old dance between stage (or narrative) conventions, and historical truth – in the form of a ghost story…

And Alessandra played it just the way I had imagined it.

It doesn’t happen often. Most of the time, I can’t help staging what I write in my head, but directors and actors know better – so that, come first night, the staged play doesn’t look much like what I had imagined. I have learned to trust the process, because for one thing, they really know better, and then it is enormously fascinating to se my words take life through someone else’s interpretation. It’s one of the joys of this form of writing.

It was a little hard at the very beginning, but I’m lucky in that I work with wonderful people who truly know their stuff and respect of the  text – so perhaps I’ve had it easy in learning to trust the process. I mean – as aspiring playwrights, we all read G.B. Shaw fulminations against the actor and director who turned upside-down his intentions for Dick Dudgeon… We read it as a cautionary tale, and expect something of the sort to happen. Well, so far it never happened to me. It may be that I’m easier to please than Shaw – but on the whole I think I’m really lucky.

That said, this time Alessandra played Agnese just as I had imagined her. And I hadn’t even written the part for her – in fact, I didn’t even know she would be in the cast, when I wrote the play. So it just happened. Perhaps I had imagined the right things, or it was serendipity… I don’t know.

And mind – I’m not saying I’d want this to always be the case. I love to be surprised, stage-wise – and in the end this was another kind of surprise. Besides, the theatre was chock-full and the applause warm and abundant. Shall I said it again? It was lovely.