And if I thought that after “my” Oedipus I was done with Greek Tragedy for the moment, it seems that I was very much mistaken.

Yes, we are already working quite hard on other things a-plenty – but, for one thing, there’s talk of reviving the Oedipus next August, in a lovely place; and for another, there’s the school play.

Tentatively titled something that translates as “Fathers’ Faults”, it’s a handful of pieces from several tragedies, exploring faulty father-child dynamics. In addition, the final project of my own play-writing course consisted in the collaborative writing of a frame to tie together all the pieces, so we now have a substantial Chorus that is part narrative device and part voice of… well, not quite voice of reason, but rather voice of doubt, wondering and questioning.

The writing part was quite interesting. I always find collaborative writing an illuminating experience, and it strikes me that, were I ever to form an idea of a group of people, I’d sit them down to do just that: write together. I’ve done it across the years with all sort of age-groups now – from middle-graders to the elderly… at times it was actual writing, at times just building a coherent plot from a few building blocks, but the result is always the same: both individualities and group dynamics come to the fore like a charm.

You get to see who really thinks things through, who throws ideas against the wall, who leads, who sulks, who asks good questions, who struggles, who just who enjoys and who resents team-work, who is logical, practical, easily distracted, argumentative for argument’s sake… there are often surprises, always interesting things to observe.

And the current group – mostly women and a few men, between fifteen and sixty, with an overwhelming majority of trained teachers – makes no exception. 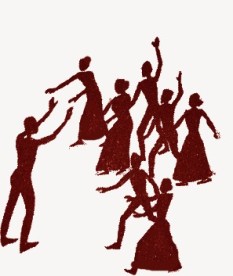 Now we’re mounting the whole thing – and I’ve found myself (a little unexpectedly) involved in that too: trying to make our collection of doubts and questions into a satisfying theatrical experience. It’s taking shape, and this is another fascinating process to watch – or, in this case, help happen.

I don’t think I’m an especially good teacher – I’m too impatient for that, and short-tempered, and unable to like slow-learners – but  one  tenet of my mother’s passionate faith in teaching I really appreciate : one can learn a good deal.